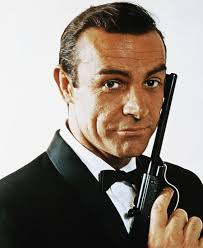 Ask the average movie geek what the world's longest-running movie franchise is, or consult most websites on the topic, and you'll generally get one of two answers: James Bond, or Godzilla. This post is my little contribution to the topic to say that both answers are wrong. A few really ambitious websites appear to suggest that Wong Fei Hung tops the list with a staggering 88 movies as of 2012, however these were most disparate films based on the same character and rarely sequels to one another (Once Upon a Time in China being an obvious exception). If we're playing that game, we'd need to count up all the films adapted from Dracula, Sherlock Holmes and Hamlet as well.

For the purposes of my list I've included reboots as part of the same franchise, because they're generally made by the same producers. I haven't included direct-to-DVD sequels, which puts stalwarts like Hellraiser and The Land Before Time out of the running. So, before going ahead: do you know the answer? What is the world's longest-running movie franchise? Here's what I think are the top 10 (or 11, really, since there are ties):

#10: Halloween
(10 movies)
Halloween is to my mind the weakest of the 1980s American horror franchises, simply because Michael Myers simply isn't very interesting. Despite this qualm, the original run lasted for seven films, plus a reboot and its sequel, and the out-of-place Halloween III - which doesn't link up to the other nine films at all beyond its title.

#9: The Pink Panther
(11 movies)
When people try to work out the longest-running movie franchises, they often focus on horror movies and forget about comedy altogether. It's actually kind of mind-boggling that there have been eleven movies based on Inspector Clouseau - he wasn't even supposed to be the lead character of the original film. The character was played six times (once posthumously) by Peter Sellers, twice by Steve Martin, once by Roger Moore (in cameo only), once by Alan Arkin and his son played once by Roberto Benigni in 19993's Son of the Pink Panther - made back before everyone realised that Benigni was the most irritating actor in Italian cinema history. 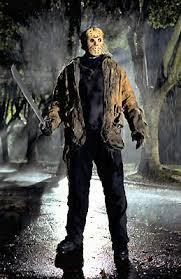 #8: Friday the 13th & Star Trek
(12 movies each)
Friday the 13th managed to run for 10 films in its original series - and that includes both Friday the 13th: The Final Chapter and Jason Goes to Hell: The Final Friday, neither of which were the final film in that run. Then there was the Freddy vs. Jason crossover film, and a reboot. Another reboot is in development, which will bring the total up to an appropriate 13.

#7: Pokemon
(16 movies)
You might not have been paying attention, since they stopped being screened in international cinemas about 10 instalments ago, but Pokemon - based on the popular Nintendo videogame series - has now ratcheted up a whopping 16 separate feature films. That's a lot of animated animal-catching to watch through.

#6: James Bond
(25 movies)
James Bond, often cited as the longest-running movie franchise, is actually at best the sixth-longest. 25 films have been released since Dr No in 1962, although two of those didn't form part of the "official" EON Productions run (Casino Royale and Never Say Never Again). This is another franchise that rebooted itself: in this case with a second Casino Royale in 2006. A 26th film is due in late 2015.

#5: Zatoichi
(28 movies)
The adventures of the blind Japanese swordsman ran for 26 original films, followed by two reboots. The first 26 all starred Shintaro Katsu and were cranked out at a remarkably fast rate between 1962 and 1989: four of them were released in 1964 alone. In addition to the two remakes (in 2003 and 2010) there was also a 2008 spin-off titled Ichi featuring a female version of the character - so depending on your definitions there are either 28 or 29 movies in the series. 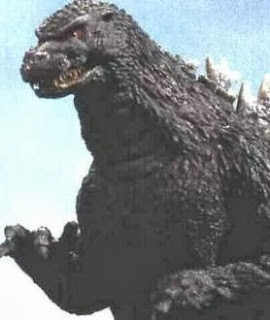 #4: Godzilla
(29 movies)
Toho Studios produced 28 Godzilla movies, between Godzilla/Gojira in 1954 and Godzilla: Final Wars in 2004. The franchise was effectively rebooted twice during that time (in 1984 and 1999). Of course there was also the Roland Emmerich-directed American reboot from 1997 - whether or not it officially counts in the Godzilla total is open to debate (I included it). A second American version is due in 2014, which potentially brings the total up to 30.

#3: Carry On
(31 movies)
Now I can't stand the Carry On films, but there's no denying their success. Puerile British farces heavy on innuendo and sexual misadventure, they racked up 31 movies generally with the same (or similar) cast, production crew and a surprisingly limited pool of writers. Carry on Sergeant (1958, and starring William Hartnell) was the first; Carry on Columbus (1992) was the last. I hope.

#2: Doraemon
(35 movies)
Even if you don't think you've ever heard of Doraemon, you're probably familiar with its titular hero - a rotund blue robot cat who seems to grace the shelves of every gift shops in every Chinatown on Earth. Doraemon started as a manga, became a TV series and then an annual series of movies that have been trailing on since 1980. 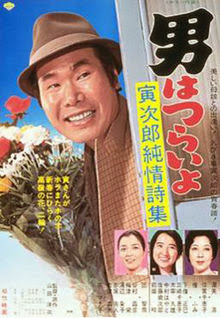 #1: Tora-San
(48 movies)
This is the ultimate movie franchise, however, and if you're not Japanese there's a good chance you've never even heard of it. Tora-San is a series of films about travelling salesman Kuruma Torajirō, who travels somewhere, falls hopelessly in love with a young ingenue, fails miserably to succeed in life, and then goes on his way.

All 48 instalments starred Kiyoshi Atsumi, and all 48 were directed by Yoji Yamada - a director better known outside Japn for his recent samurai dramas The Twilight Samurai, Love and Honour and The Hidden Blade. The series only stopped when Atsumi died, and it seemed disrespectful to recast the role after so many films.
Posted by Grant at 9:05 AM

Email ThisBlogThis!Share to TwitterShare to FacebookShare to Pinterest
Labels: film