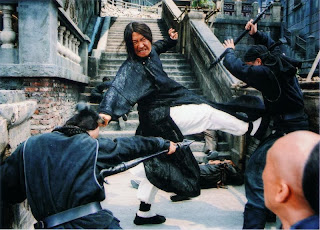 In 1906 Hong Kong a team of pro-democracy revolutionaries secretly prepare for the arrival of their leader, Dr Sun Yat-sen. At the same time, a representative of the empire makes preparations of his own – not to greet or defend Dr Sun, but to assassinate him. When these two forces collide the result is a blistering gauntlet through the streets of Hong Kong, in an effort to keep the revolutionary leader alive.

Bodyguards and Assassins is without question a propaganda picture. Not only does it concern itself with the foundation of China as a democratic republic, its plot presents to us in detail the nobility of sacrificing one’s life for the ideals of such a republic. This makes it a ridiculously Chinese film, rich with Confucian ideals and pro-communist rhetoric. One’s enjoyment of the film is therefore conditional on how one responds to this sort of emphatic patriotism. If the overriding political intentions of Bodyguards and Assassins do make it difficult for some viewers to watch, this is a shame. Director Teddy Chen has created an exceptional motion picture. It is full of rich, engaging performances and wonderfully vivid photography.

In many respects the film evokes the more popular Hong Kong films of the 1980s and 1990s, through setting, cinematography and storyline. Chen claimed an intention to make his film more contemporary and less like Hong Kong films from previous decades. By seeking something new, it feels as if he has sneaked around in a circle and unwittingly found himself recreating the past. This is not necessarily a bad thing: by rediscovering the way these sorts of films used to be made Chen has possibly re-discovered why many of us started watching them in the first place.

One significant difference between Bodyguards and Assassins and its predecessors is budget. More than $150 million RMB was spent bringing this story to screen, largely due to the massive reconstruction of Hong Kong’s Central district in all of its 1900s glory. The combination of the large back-lot set and a computer-generated skyline gives the film an unparalleled sense of period detail.

Another highlight of the film is its all-star cast. The popular among them is easily Donnie Yen, who plays Chung-yang: a policeman and gambling addict who betrays his former imperial employers by defending Dr Sun. It is a strong performance, with Chen providing ample time for both action and character depth. Yen also provides one half of the film’s stand-out martial arts sequence as he and one of the imperial assassins tear up a marketplace in a violent no-holds-barred showdown.

The closest thing among the ensemble cast to a lead actor is Wang Zueqi as Li Yue-tang, a prominent Hong Kong businessman, who has been bankrolling the resistance movement while carefully preventing his son (Wang Bo-chieh) from joining the rebels. Wang gives a wonderful and dignified performance here, showing many layers of emotion and nuance. As so many of the other characters enter the film through relation to him, Li becomes a core protagonist around which everything else in the film circulates. Several other actors impress, notably Li Yuchun as the sole survivor of a group of theatre performers murdered by the assassins, Tony Leung Ka-Fai as democracy activist Chen Xiao-bai and also Nicholas Tse as Ah Si, Li Yue-tang’s determined and loyal rickshaw driver.

As is often the case with these kinds of films, room is found for a few star cameos: notably Jackie Cheung as Hong Kong’s first-ever assassination victim and Simon Yam as the performing troupe leader. While it does provide a nice moment of recognition, such cameos do have a way of distracting the viewer from the bulk of the action.

The screenplay is quite different from the standard period martial arts film: rather than intersperse the action between segments of plot, Bodyguards and Assassins gives us almost the entire plot up-front, meticulously setting up each character, conflict and situation for just over an hour. It’s a risky manoeuvre, but one that pays off in the second half as the film makes its frantic and explosive sprint through the streets of Hong Kong. The same technique has been used in some of the best action-thrillers ever made, notably Jaws and Jurassic Park. While Bodyguards and Assassins is a very different film (no sharks and dinosaurs, for one thing) the technique is the same – and just as effective.

What separates Bodyguards and Assassins from other patriotic films from around the world is its comparative tightness. This isn’t a film that wastes time. It isn’t leaden or excessively pompous. Rather, it is a good story engagingly told, rich in strong performances and beautifully shot and directed. It sets all of its pieces carefully on the board, and then plays them out at a breakneck pace. Hollywood could learn a lot from films like this.

This review was originally published on the Eiga: Asian Cinema blog.
Posted by Grant at 10:46 AM