Babylon 5: "Point of No Return" 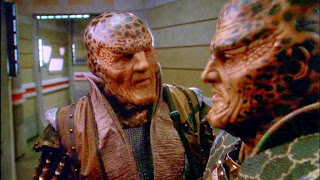 Babylon 5's pivotal three-parter continues in "Point of No Return", the episode that just happens to share a title with Season 3 overall. The command crew struggle with an order from Earthforce to hand over control of station security to the Nightwatch, President Clark's insidious and McCarthyesque vigilante organisation. Back on Earth, the senate is dissolved and its senators arrested. Under the command of General Hague sections of the Earthforce military are splintering off and preparing a coup d'etat.

In the middle of all this chaos, Londo Mollari hosts a visit to the station by the late Emperor's third wife Lady Morella (Majel Barrett). Morella is a powerful seer, and her readings of Londo and Vir's future hold surprises for them both.

This is, in many respects, the difficult middle third of a trilogy. Events begins very much up in the air, and while they progress extensively through the episode, things end still very much in an unresolved fashion. It is, however, packed with great performances and very satisfying moments.

There's a brilliant moment of absolute panic when the population learn that the station has fallen under martial law. It's a difficult job to sell the idea of a massive political upheaval like this on a comparatively limited budget, but to the production team's credit sell it they do. Star Trek: Deep Space Nine had twice the budget and their version of a similar upheaval was half as convincing. (Their version also stole General Hague - with actor Robert Foxworth jumping ship to play the near-identical Starfleet Admiral Leighton. Straczynksi simply killed Hague off in response.)

Speaking of Star Trek it would be remiss not to praise Majel Barrett, who plays Lady Morella here. Barrett was Nurse Chapel in Star Trek, Lwaxana Troi in Star Trek: The Next Generation and Star Trek: Deep Space Nine, and played the voice of Starfleet's computers pretty much until she died. I think her performance here, which is reserved and dignified, surpasses anything she did in 30 years on Star Trek. Her prophecy for Vir and Londo, that both will become Centauri Emperor - one after the other has died - provides not only some brilliant foreshadowing but some welcome comic relief as well.

I loved that the Centauri-Narn storyline got progressed here, with the Narn refugees replacing the Nightwatch as station security, and with G'Kar continuing his transformation from blustering warmonger to meditative spiritual leader. It's a believable transition, and one that adds immense depth to his character. When I'm picking a favourite character in this series it's always down to Londo and G'Kar, but I think G'Kar has the edge here.

This is another outstanding episode, pushing the story forward a lot more dramatically and more quickly than I had expected - or indeed remembered. That makes six good episodes out of nine, with a quality ratio for Season 3 of 67% and counting.
Posted by Grant at 8:57 PM