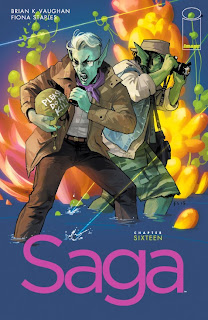 It's probably preaching to the choir to say that Brian K. Vaughn and Fiona Staples' Saga is one of the best monthly comics in the market right now. That in mind, I still feel obliged to remind everybody from time to time that this really is one of the closest things to a sure bet in comics today. Every issue is enjoyable, and every issue pushes the narrative forward. The series is regularly filled with inventive ideas, interesting art and wonderfully realised characters. Oh the characters: every time someone new joins the cast they become another one of my favourites.

This weeks issue is particularly good, and very rewarding to the long-term readers, because it does a brilliant job of slotting jigsaw pieces into the overall story precisely when you're not expecting it. It makes sensational use of non-linear storytelling, and brings multiple plot strands together in a way I did not expect. So brilliantly written, brilliantly illustrated and brilliantly surprising.

If you're not reading Saga, either every month, or every few months in trade paperback, I really don't know how to help you. (5/5) 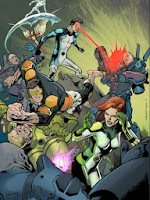 The key event in this issue is that X-23, the teenage girl Wolverine character who's been over in Avengers Arena for the past year, is now back among the X-Men and heavily traumatised by what's been happening to her. That plot point could be told in two pages. A particularly good writer could tell it in one. Bendis takes an entire 20 page issue to get to the point. The fact that this is the second issue of All-New X-Men this month only makes the padding more egregious. I've been enjoying this book, but if it keeps stalling and slowing down like this, then it's simply not going to be worth the money Marvel expect me to pay to read it. (2/5)

Am I the only one who liked John Constantine better when he was isolated off in his own little self-contained Vertigo series? The version who joined the New 52 seems to be all over every book like some kind of embarrasing fungal infection: constantly appearing, always unwanted. Anyway Constantine and Jonah Hex team up, and then Swamp Thing arrives, and - gah! All I want from this book is a neat western with occassional hooks into the future DC Universe. Instead I'm getting... I don't quite know what I'm getting. It was clearly set up as a stunt to improve sales on a flagging title - get Hex into the 21st century, get him to interact with the DC Universe properly - but for this reader it's not as good as it was when he was in the 19th century shooting cowboys. (2/5)

Geoff Johns departs from the comic book he famously revived two years ago, and for the most part it's an excellent and thrilling climax. Things tie together nicely and we conclude in what could almost be a perfect place for new writer Jeff Parker to take over next month. Except... the book has a pointless little epilogue at the end to let us know the story arc isn't really over, and to find out what happens next we need to buy a future arc on Justice League. I don't like when DC and Marvel do this: if it's an Aquaman arc I want to read about it in Aquaman. (3/5)

This book continues to suffer from an irregular shipping schedule, because it's sucking all of the momentum out of the story. I'm finding this second story arc to be nowhere near as addictive or effective as the first. I hope it's a "difficult second album" phase rather than an actual decline in quality, because I really adored the first arc to bits. Part of the problem is Ryan Browne's art style, similar enough to original artist Riley Rossmo to remind me of it, but not as good - so the ultimate effect it has is making me miss Riley Rossmo. Is it still good? Yes. Is it as good as it could be? I'm not sure that it is. (3/5)

Rick Remender's been making a name for himself in recent times as one of Marvel's better writers. Here he kicks off his own title with the story of Grant McKay, a mad scientist having a very bad day. Life, death, a race against time, swamps, alternate dimensions and evil frogs - all in the space of a single issue. It's a very fast-paced, frantic sort of first issue, heavy on narration but also very high on action and suspense. It's a wonderfully 'into-the-deep-end' debut that's taken from great to fantastic with the addition of Scalera and White's artwork. There's a strong Metal Hurlant vibe coming from this title that's only a good thing. Yet another quality SF title from Image. (5/5)

Another "Zero Year" tie-in, this time seeing a pre-Flash Barry Allen head to Gotham City to help its beleaguered police force with the city-wide power cut and the incoming superstorm. It's a neat little slice of Gotham City action given a little fresh twist by using Barry Allen and not a character from one of the Bat-titles. I believe this is the final issue for Buccellato and Manapul, and it's a nicely enjoyable one-shot to see them off. (4/5)

This is a really entertaining and vastly underrated book. Here the Green Team have to deal with losing a punch-up on an asteroid, followed by finding a way to ride that asteroid to Earth without (a) burning to death in the atmosphere, and (b) killing everyone on impact. This is the sort of over-the-top wild adventure I like to see in a superhero book, and it's boosted by great, character-filled art by Ig Guera and J.P. Mayer, and good dialogue by Balthazar and Franco. (3/5)

Kate Bishop's Californian adventures continue. I love the direction this book has taken, basically becoming two bi-monthly series running out of synch with one another. Last month we saw Clint Barton's Hawkeye adventures in New York, but this month we're on the other side of the USA as Kate Bishop turns private detective in order to pay the bills. This issue was laugh-out-loud funny, and poked a lot of deserving fun at the sorts of tropes that usually accompany this kind of story. This remains a jewel in Marvel's crown; I hope Fraction and his pals keep producing the book for a long time. (5/5)

Before the world collapsed, Callum Israel used to use his ships - the Kapital and the Massive - to fight whaling. Now he's back doing it again, only without the rule of law to hold each side back the conflict is getting deadly. It's particularly interesting to read because of course the tide in this post-apocalyptic world has turned. It used to be the Kapital against massive floating whale factories - now it's the Kapital versus Norwegians in wooden longboats. The contrast is very effective. This is a sensational issue for a comic that, while always interesting and smart, has often felt a little stand-offish and dry. There's no risk of that here. This is high-stakes revenge drama, and absolutely riveting stuff. (5/5)

Yet another five-star comic book this week: this is the fifth. A lot of plot strands tie neatly together here with some crucial developments, great character work and some really effective moments of horror. There's nothing quite an eight year-old girl brightly telling her mother that she should cut off her own eyelids so that everyone can see her pretty eyeballs all the time. Creepy kids: they get me every time. If you're interested in trying this book out, I really recommend the first two trade paperbacks. It's a story that reads even better several issues at a time. (5/5)

I haven't enjoyed this second arc as much as the first (shades of Bedlam there), but with this issue the story really has jumped up a notch and sets itself up for a fine climax in December.  Part of my problem with this arc was that it seemed to abandon a few very enjoyable characters, and so I suspect much of my enjoyment here is seeing those same characters make a much-needed comeback. This isn't as strong as Dark Horse's main Star Wars title, but it's going okay. Hopefully it's third arc (beginning in January) will kicks things up a little. (3/5)

This is the 600th post in The Angriest. Thank you for continuing to read and support my opinions.
Posted by Grant at 10:47 PM