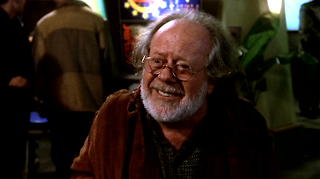 One of Marcus Cole's contacts down below goes missing. When Garibaldi refuses to investigate, Marcus applies a little deception to get Dr Franklin to come along on an undercover mission. They uncover a species of strange alien insect that borrow into the spines of human beings and apparently controlling them in an attempt to take over the station. Meanwhile Commander Ivanova meets with a newly promoted lieutenant to see if he's fit to join Sheridan's growing 'army of light'.

This is an unexpectedly good episode of Babylon 5. It begins with a worrying number of science fiction stereotypes and cliches, but then spends a lot of its second half actively inverting and transforming those stereotypes. The result is an episode that feels comfortingly familiar yet also oddly refreshing. It's not going to win any awards, but it's a pleasantly enjoyable hour of science fiction drama.

The big cliche around which the episode is wrapped is the idea of alien parasites infecting human beings and slowly undertaking a takeover of the station. It's been done in Doctor Who, Star Trek: The Next Generation, Blake's y and pretty much any other SF TV series that you can name. The big twist this time around is that, for all their insectoid appearances and holding of hostages, the parasites are actually relatively benign. The conflict ultimately comes about due to misunderstandings rather than one faction being good and the other evil.

The episode's a big opportunity for Jason Carter and Richard Biggs, who gets the lion's share of the spotlight and plenty of time in captivity to share dialogue and expand their characters. This really is the first major opportunity Carter has had to develop the character of Marcus. I was pretty critical last season of how badly J. Michael Straczynski wrote Lt Keffer, a character forced on him by the network to add a dashing romantic male lead. It's clear that with Marcus Straczynski is doing exactly what the network wanted in the first place - only in his own time and on his terms. I'm not usually a fan of Richard Biggs' acting, but he's genuinely appealing here and rather funny. He and Marcus make a good team.

This episode's big guest star - well, big for science fiction fans - is Aubrey Morris, an English actor best known for A Clockwork Orange and The Hitchhiker's Guide to the Galaxy. He's amiable here, and quite enjoyable to watch. His character, the homeless man Duncan, is nothing exceptional, but Morris definitely makes it work.

In a subplot, Ivanova sounds out a newly promoted lieutenant to determine whether or not he'd be supportive of Captain Sheridan's growing secret operations on the station. This leads to romantic misunderstandings that are just underplayed enough to be enjoyable, and not irritating.

The best word for this episode is 'solid', which is no bad thing. We're seven episodes into Season 3, and four of the episodes have been enjoyable. That finally drags us over the 50% mark and a mediocre yet promising 57%.
Posted by Grant at 9:41 AM