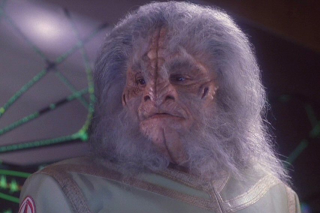 Armed with fresh intelligence, Captain Archer leads an away team to an isolated Xindi colony. There they find a manufacturing facility preparing the contents for the Xindi super-weapon - as well as face the revelation that not all Xindi are as evil as they had assumed.

"The Shipment" is a highly archetypal Star Trek episode, in which a group of Starfleet officers travel down to a planet and confront a moral quandary once there. Archer is driven to destroy the Xindi's new weapon before it can annihilate Earth, but he is not prepared for the discovery that the people manufacturing the weapon's fuel don't actually have a clue what their work is for. The core of the episode is a conversation between Archer and the facility supervisor, Gralik, where they learn about each other's cultures and come to a greater understanding. This sort of thing is what Star Trek does best, and as a result "The Shipment" is a pretty entertaining episode.

It's not all faultless. The Xindi are actually a conglomerate of five different species, and while the Arboreal Xindi (who include Gralik) look great, the more two-dimensionally evil Reptilian Xindi look absolutely ridiculous - in fact I have a sneaking suspicion their design is ripped off from Galaxy Quest. When your alien looks like a parody of your franchise's aliens, then you probably have a design problem.

Steven Culp returns as the absolutely unnecessary Major Hayes. I feel quite sorry for both Culp and Enteprise overall. He's a fantastic actor and is being absolutely wasted here. There is absolutely no reason why he and his team of marines should be on the Enterprise, and I don't think anybody viewing the show would have questioned the Enterprise crew simply heading off on their mission with the crew that they already had.

Onboard Enterprise there's an intriguing subplot involving Tucker and Phlox investigating a Xindi rifle that uses biological components. I'm assuming this is a plot detail that will be picked up again down the line, as was done with the alien spheres in the previous episode.

So all up this is an entertaining, quite traditional, episode of Star Trek. It leaves Season 3 with four good episodes out of seven, or a cumulative score of 57%. The season is finally beginning to slide out of mediocrity.
Posted by Grant at 9:16 AM