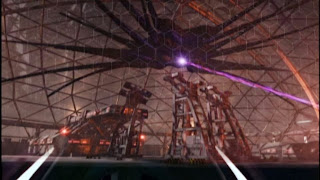 A runaway archaeologist arrives in secret on Babylon 5 with urgent news for Captain Sheridan. She recounts how, several years ago, the Earth government uncovered a Shadow vessel buried under the surface of Mars - and how elements within Earth's government colluded with the Shadows to have it recovered. What's more, a second buried ship has now been buried on the moon Io, and this time Earth's President Clark has no intention of giving it back.


Within the traditional three-act narrative, there's what you call a 'midpoint'. It's the turning point for a story that occurs halfway through, where the protagonist will usually make a decision and their ultimate mission becomes clear. "Messages from Earth" is the first part of a marathon three-part story that together form the midpoint of Babylon 5. That makes sense: it's a five-season series and we're pretty much at the mid-point of the third season. These three episodes are entirely about the long-term narrative. Major changes take place. Stakes are raised. Things, as they often say when hyping serialised storytelling, will never be the same again.


I have to say: the sight of a massive Shadow spaceship cruising silently over the surface of Mars is quite possibly the most bug-eyed terrifying thing Babylon 5 has shown so far. It's such a marvellous design for a creepy spaceship, and this episode really drives home the power and scale of the thing. There may be many elements in Babylon 5 that I criticise, but the Shadows sure as hell aren't one of them.
The first act of this episode is a little unusual, since it involves a flashback with heavy narration to set up the concept of Shadow starships buried in Earth's solar system. Against my expectations it works really well, and is a nice contrast to the main section in which Sheridan and Delenn pilot the White Star to Io in order to destroy the new Shadow ship before it can be moved to Earth. This is a great, action-packed sequence with the White Star facing not only a Shadow ship that's gone wildly out of control but also the Agamemnon - Sheridan's old command sent to disable and capture the White Star for intruding on Earth space.

Back on the station, the Nightwatch begins to mobilise more aggressively. Previous episodes seem to have been unable to decide whether the Nightwatch were an analogy for McCarthyist America or Nazi Germany. Straczynski finally seems to have picked one, with McCarthy winning out. It's the better choice in the context of the series, and feels very believable and rather insidious. There's some nice material developing here for Jeff Conaway as Deputy Chief of Security Zack Allen: he's a very trusting guy, too trusting in fact, and now he's trapped in a situation where very soon he's going to need to pick a side.

In among the action there are some great moments between Sheridan and Delenn. Their conversation in the White Star sleeping quarters is very sweet and charming, and performed with immense grace by both actors.

Finally there's the episode's last-minute kicker: President Clark has declared martial law over Earth, citing an alien conspiracy to frame him for murdering his precedessor, and claiming the White Star was responsible for destroying the Io colony. It was always clear that things were going to go badly for Earth at some point during the series, but I'm not sure I anticipated it going this badly, or more importantly this suddenly. It's an effective and provocative game changer for the series: Babylon 5 is an Earth Alliance colony, supervised by the Earth military. What the hell happens now?

Not just good but great, "Messages from Earth" pushes the Season 3 quality ratio up to 63%. I think that sudden upswing in quality I was hoping for has just arrived.
Posted by Grant at 10:06 AM