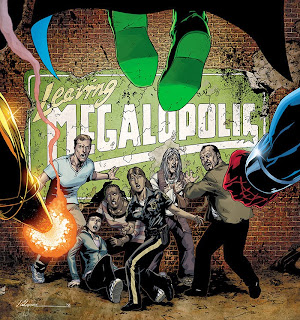 I'm a huge fan of Kickstarter, the crowd-sourcing service that enables artists and enterprising individuals to go directly to their audiences and hit them up for support. Thanks to Kickstarter and its fellow crowdsourcing sites I've purchased a truckload of plastic fantasy miniatures, a wordless pencil-sketched giant robot graphic novel, a Spanish comic book about dwarves, the complete history of Sensible Software and a card game based on Moby Dick.

Leaving Megalopolis is a graphic novel written by Gail Simone with art by Jim Calafiore. It follows a small group of survivors as they try to escape the fictional American city of Megalopolis. Something has happened, and the book gradually explains what, but basically all of its superheroes are now killing the population for fun. Structurally this is exactly like a zombie movie, with a disparate band struggling to escape monsters while collapsing from within. The difference is that you can run away from a zombie. You can't run away from a psychopathic version of the Flash. Or Wonder Woman. Or Superman.

Jim Calafiore provides strong, effective artwork - I've rather liked his art for some years now, and certainly his style matches the script. As for Simone's script, I'm not sure it does anything startlingly original, but what it does do is take two very separate tropes - the superhero story and the zombie movie - and blends them in a way I don't remember seeing before. The little "1" at the bottom of the book's spine also suggests that this may not be the end of the story of Megalopolis, which pleases me. While this book definitely has an ending, and I'd still be satisfied if this is all we got, I'd also be very happy to see it continue as an irregular series of graphic novels.

I'm a big fan of Kickstarter, because it allows interesting projects to be taken directly to their audience for support. Sure, Leaving Megalopolis could have probably been published via one of the USA's leading independents (Image, Avatar, what-have-you), but would it have been as distinct? Would it have been in hardcover? Would I have felt so connected to its publication? I'm going to say no. This is a great, dark, horribly bleak little superhero book that I'm very happy to have supported, purchased and read. Track it down and check it out.
Posted by Grant at 1:17 PM