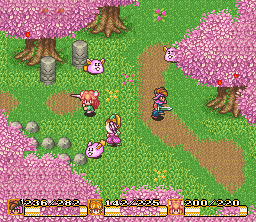 A young man recovers a magical sword from a stone, inadvertently releasing a horde of monsters into the lands around his village. As a result he is banished from his home, and winds up travelling the world visiting the eight mystical Mana Temples in order to replenish his sword’s magical energy and prevent an evil sorcerer from taking over the world.
It’s pretty tedious stuff when read from a page – certainly it was pretty tedious stuff while I was writing it down. It’s the basis, however, for Secret of Mana, a 1993 Japanese role-playing game (RPG) released for the Super Nintendo Entertainment System (SNES). For most of the people who have played it, it is one of the most fondly remembered games of the SNES era. For fans of Japanese RPGs, it remains an absolute classic of the genre.
So why, if the story is so derivative, is Secret of Mana so fondly remembered? Like most videogames, the quality of the story took a back seat to the quality of the gameplay, the graphics and the sound. In these respects Secret of Mana excelled. At the time there really wasn’t a game available for the SNES that combined such high quality images and music with such a wonderfully immersive gaming experience. 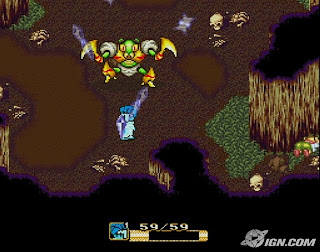 Email ThisBlogThis!Share to TwitterShare to FacebookShare to Pinterest
Labels: Japan, making of, videogames