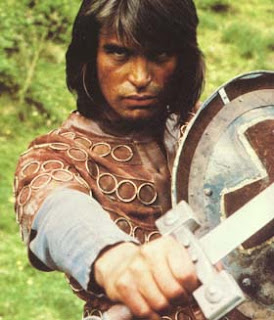 Arthur of the Britons was one of those strange TV shows that I saw as a child during the school holidays in the mid-1980s. It was a half-hour British adventure series, and seemed like no other version of the King Arthur legend I had encountered. It seemed rougher, smaller and dirty. Camelot didn’t seem to exist, and Arthur and his knights seemed to live in a wooden fort.
I didn’t realise at the time that the series wasn’t a new one. Arthur of the Britons was produced for two seasons between 1972 and 1973 by HTV, one of Great Britain’s regional television stations. The series was set in the Dark Ages: the Romans had withdrawn from Britain, and Arthur was Celtic tribal leader defending his territory against Saxon invaders. Even 38 years later it feels like a completely fresh take on the Arthurian legend, creating the sort of “the real Arthur” mystique that the 2005 Jerry Bruckheimer film could only dream of. In many ways it foreshadows another HTV production, Robin of Sherwood, which took the well-worn Robin Hood legend and created something new out of it for the 1980s.
The series starred Oliver Tobias as Arthur, alongside Jack Watson as his adoptive father Llud and Michael Gothard as his right-hand man Kai. As far as I can find out Arthur was Tobias’ biggest role, although he did appear in a number of films and TV dramas (including the aforementioned Robin of Sherwood). Jack Watson was a mainstay of British film and television, having appeared in Peeping Tom (1960), This Sporting Life (1963), The McKenzie Break (1970) and The Wild Geese (1978). His final performance was in the hit 1986 miniseries Edge of Darkness. Meanwhile Michael Gothard is probably best known for playing Emile Leopold Locque in For Your Eyes Only (1981), as well as appearances in The Devils (1971) and The Three Musketeers (1973).
The first episode of Arthur of the Britons is titled “Arthur is Dead”, which suggests perhaps the shortest-lived television series ever. Instead it’s a tale of rivalry and power plays as the apparent death of Arthur leads the various Celtic warlords to make their bids to rule in the face of a Saxon incursion.
The episode begins with Arthur and Kai racing each other on horseback. It’s a surprising scene, primarily because it lacks a musical score. This gives the episode an unexpectedly contemporary feel, which is something that keeps returning sporadically through the episode. It’s an odd start to the series, possibly even more so when viewed in 2010, because while some elements – like the lack of music – feel highly contemporary, other elements feel as dated as you would expect.
“Arthur is Dead” continues with Arthur telling the assembled warlords that whoever can roll away a boulder and take a sword trapped underneath it will lead the Celts against the Saxons. The secret is, of course, to work together in rolling the boulder away – a symbolic act to demonstrate that only through cooperation will the Saxons be defeated for good. It’s a clever re-purposing of the Arthurian “sword in the stone” legends: immediately recognisable yet wonderfully down-to-earth at the same time.
The warlords include among them Brian Blessed as Mark of Cornwall, a loud, bellowing sort of warrior chieftain. This should come as no great surprise, since Blessed has made a career precisely out of these sorts of shouting, over-the-top roles. He’s either a national treasure or a notorious ham - possibly both – but whatever he is, he makes me smile every time I see his name in the credits. He shouted his way through Doctor Who (“Mindwarp”, 1986), Blake’s 7 (“Cygnus Alpha”, 1978), Flash Gordon (1980), The Black Adder (1983), High Road to China (1983), Henry V (1989) and numerous other films and TV programmes.
Mark of Cornwall is a fairly abrasive and disgruntled sort of person, and shouts his way gleefully through the episode.
It was about halfway through the episode that three other things occurred.
The first was the surprising amount of handheld camera work. As with the lack of music at the beginning, it gives the episode a fairly rough, contemporary quality that I wasn’t expecting.
The second was that Arthur of the Britons seems a very cheaply made series. The costumes are not elaborate, and the whole thing is shot on location in what looks like a hastily assembled wooden play fort in the middle of a field. British television rarely led the world in technical quality, but I suppose for an ITV production shot on film I was expecting something just a little less scrappy.
The third thing, and this is something that dogs all films and TV series of this genre and period, is that it’s all just a little bit too much like Monty Python and the Holy Grail. That film did such an accurate job of sending up the exact sort of cheap medieval adventure that Arthur of the Britons represents that it’s subsequently difficult to take Arthur seriously. The situation isn’t helped any time any character earnestly says Arthur’s name, since it immediately sent my mind tumbling through a string of inappropriate Monty Python quotations.
The climax of the episode is, for a 1970s children’s drama, unexpectedly violent, as the combined Celtic forces fend off a small Saxon invasion. The episode even manages to include some unexpected plot twists and turns.
When re-viewing childhood favourites, there’s always a risk of disappointment: things that seemed entertaining and dramatic when you were eight suddenly turn out to be trite and disappointing when you are thirty. It’s a relief that Arthur of the Britons, while by no means a television classic, retains a marvellous amount of appeal. It’s an entertaining diversion for a Sunday afternoon; best viewed one episode at a time when you’ve got a half-hour free.
Posted by Grant at 10:37 AM