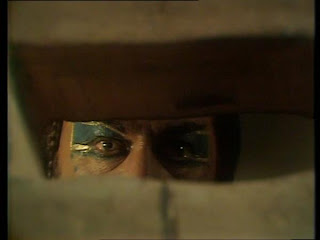 There’s something quite wonderful about British children’s television. I can’t really speak for what gets made today – I’m generally at work when children’s TV is playing – but from the 1960s to the 1990s Great Britain hosted an exceptional range of odd little youth-oriented dramas. UK children’s TV was seemingly fearless, and remarkably daring. No subject matter seemed to be out of bounds. No setting or social issues seemed too unsuitable. Whether it was Press Gang tackling sexual or solvent abuse, or Grange Hill getting Zammo hooked on drugs, or even Tom Baker getting half-strangled to death in Doctor Who, UK children’s television often seemed that classic combination of ‘mad, bad and dangerous to know’. Even TV for toddlers seems creepier and more unsettling than productions from other countries. Maybe it’s just me, but from The Clangers and The Magic Roundabout to Teletubbies and In the Midnight Garden, British toddler’s television is downright bizarre.
I never saw The Feathered Serpent on its original broadcast. To be honest, until two weeks ago I had never even heard of it. It ran for two seasons on ITV, starting in 1976 and ending in 1978. It was produced by Thames Television, and notably starred Patrick Troughton (the second actor to play Doctor Who). It’s also about Aztecs. You read that correctly, and this isn’t a joke: for two years in the 1970s Thames Television produced a children’s drama about Aztecs.
It’s not a sanitised ‘safe’ depiction of the Aztecs either. There are human sacrifices. By the end of the first episode a character has been brutally stabbed. At the start of the second, an old disgraced priest tells of how he was tied down in the desert and forced to stare at the sun into it drove him blind. Troughton (as the bloodthirsty high priest Nasca) wears a human skull for a hat.
If this series had been produced in any other country in the world, I would not have believed it really existed. When I heard that it was produced in the UK in the 1970s, I immediately accepted its existence. Why? Because as I’ve mentioned above, British children’s television is strange and challenging. Aztec sacrifice for the kids? Why not? Thanks to Into the Labyrinth it’s not even the strangest children’s show ITV ever broadcast. 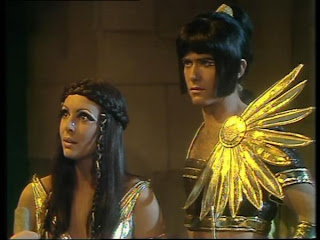 In ancient Mexico, the Aztecs have overthrown their old religion – which worshipped the ‘feathered serpent’ of the title, Quala – in favour of a violent and dangerous deity named Teshkata. The new religion demands regular blood sacrifices, leading High Priest Nasca (Patrick Troughton) to demand a regular supply of willing and unwilling human victims from Emperor Kukhulkhan (Tony Steedman). When Kukhulkhan promises peace between the Aztecs and the neighbouring Toltecs, through the marriage of his daughter Chimalma (Diane Keen) to the noble Prince Houtec (Brian Deacon), Nasca plots to ensure the downfall of the emperor and his allies and to cement Teshkata’s position as the only true religion. The main protagonist of the series is actually Prince Houtec’s messenger boy, Tozo (Richard Willis), who acts as a youthful and resourceful point-of-view for the younger viewers.
The Feathered Serpent is not a historically accurate series, but it does use its Aztec setting as inspiration for some remarkably dark and enjoyable drama. Like many British dramas of its period, the series does not have a large budget for sets and costumes. The result is something akin to the cheaper end of Doctor Who, although just like the British dramas of its period the cast go out of their way to compensate for the low production values. Every actor treats the script like Shakespeare. Every scene is presented with intensity and passion. The result is something akin to Richard III, or even I Claudius. Like me, most science fiction fans watching this will be keeping the closest eye on Patrick Troughton, and he really is quite marvellous. Nasca is light years away from Troughton’s jolly, fidgety interpretation of the Doctor. He is without question the highlight of this series.
The series’ producer, Vic Hughes, is one of the unsung heroes of British telefantasy. Not only did he produce The Feathered Serpent, he also produced and directed for The Tomorrow People, and directed the likes of Ace of Wands, Chocky and Chocky’s Children. If you’ve seen any of the last three series, The Feathered Serpent is about as good as they are – which is to say The Feathered Serpent really is very good.
The Feathered Serpent has been released as a complete series set by Network DVD, who have forged something of a niche releasing classic British television dramas. It’s a bare-bones set without any special features to speak of, but given the fairly small market for this kind of DVD that’s not necessarily a surprise. The picture quality is fairly good: I think fans used to the sorts of re-mastering seen on the BBC’s Doctor Who range might be disappointed, but it’s clear and watchable enough. Given its low budget and age, that’s more than we really have a right to expect.
Posted by Grant at 11:11 AM