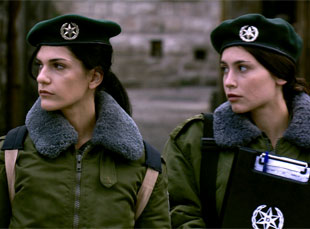 To use some random sports metaphors, Close to Home is a knockout. It hits the ball out the park. It scores a century without losing a wicket. To speak in plainer terms, it is a sensational work of low budget cinema. Shot on a shoestring in Jerusalem and released in 2005, it demonstrates complexity, heart, nuance, character and vitality. I watched it for the first time in a cinema I used to manage, as part of a program of low budget features including Primer, Keane and Down to the Bone (all of which were and still are exceptional movies). I watched it the second time over the New Year break on DVD, and my appreciation for the film only increased.
Close to Home follows two 18 year-old women undertaking their Israeli national service by patrolling the streets of Jerusalem as part of the Magav, or Israel Border Police. Smadar is cocky and rebellious. Mirit is shy and withdrawn. They don’t like each other much, but are forced to patrol together. Their patrol essentially entails stopping each Arab who tries to pass them on the street and to record the details from their identity card. It’s a tedious job, and the film goes a good length to show how dull it must be. It’s also a relatively racist and offensive job, and the film makes certain we recognise that as well. Finally, there might even be an argument that while morally repugnant it is also perhaps a necessary job.
This isn’t a film about answers, or social justice, or political opinions. It takes a very difficult and complicated backdrop, and then places into it a pair of wonderfully realised, beautifully performed young women. 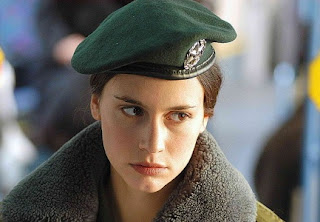 Close to Home was written and directed by Valit Belu and Dalia Hager, and was extensively drawn from Belu’s personal experience in the Magav. That doesn’t come as a surprise, since where Close to Home excels is in the smaller details. It is a very grounded, realistic film that offers a genuine insight into life in 21st century Israel. In many respects it is for films like this that cinema exists: for a viewer in Australia, or the United Kingdom, or the USA, Close to Home offers as much an insight into a different world as The King’s Speech, or Gladiator. Or even Star Wars. And the emotional strength of the film is that, unlike Death Stars and Jedis, the people and situations in Close to Home are real. These sorts of people really exist. The Magav is a real part of the Israeli armed forces. Random searches and interrogations are a daily part of life for many Palestinians.
Smadar Sayar plays Smadar. I always find it slightly bizarre when an actor plays a character with an identical name. She performs her role with a strong blend of bravado and resentment. She doesn’t want to do what she is doing, but she’s painfully aware that she is trapped doing it for the next two years. Her solution to the situation is to break and bend whatever rules she can, to skive off and work her way around the system.
Naama Schendar, who bears a striking resemblance to fellow Israeli actress Natalie Portman, plays Mirit. Mirit of course hates her national service as much as Smadar does, except that her reaction is to knuckle down and obey the rules, hide from her fellow officers, and quietly pressure her well-connected father to find her transfer to a less unpleasant range of duties.
It’s easy to describe the characters and the story outline and make Close to Home come across as a bundle of clichés. This is ultimately a film best experienced by watching it. The genius is not in the broad storyline or characters but in the nuance and realism. It’s a small scale story about ordinary people, and as a result we can identify with them so much more strongly.
It should also be noted that this is a feature film written and directed by women, and is almost overwhelmingly populated with women. It passes the much-mentioned “Bechdel test” with flying colours, but more than that it passes it through emotional depth and strong, gripping drama. It’s a film that’s worth something.
Making a film based around the Israeli policing of Arabic residents is inevitably going to court controversy and debate. The Soda Pictures DVD of the film that I watched contained an Al Jazeera TV question-and-answer session with the two writer/directors in which two members of the audience started angrily debating the film without the filmmakers’ participation. I feel relatively ill-equipped to pitch in too heavily with my own opinions. Based on Close to Home, Jerusalem appears to be pretty difficult city in which to live: stressful and terrifying for Jews and cruel and degrading for Muslims. I found the film did an exceptional job of not taking sides. It is a Jewish story about two Jewish women, and so the focus is – to my mind – fairly focused on them. The Muslim experience, however, lurks in the background. It rises again and again through a string of anonymous day workers, forced to stop and be questioned, searched, undressed and sometimes harassed, all because of their ethnicity and religion.
Close to Home is like a checklist for quality. Strong realism, powerful emotion, well-rendered characters, conflict, depth, challenging material, strong production values on a limited budget: this film seems to get everything right.
Posted by Grant at 9:14 AM