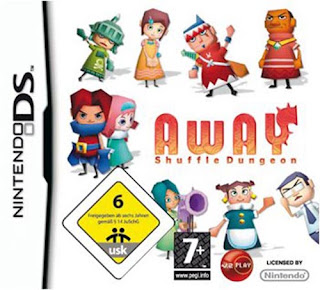 Videogames are not always the most original of mediums. I suppose the same may be said of pretty much every creative medium: just as you’re always going to discover derivative videogames, you’re also going to be able to easily find derivative films and novels. For some reason they seem to stand out more obviously to me in games. Maybe it’s the gameplay – how many substandard platform games were released for the SNES and Megadrive, each with their own cute animal-based mascot, each desperately attempting to replicate the success of Mario or Sonic? How many bland first-person shooters get released every year? Games are a highly commercial medium, arguably even more so than film and television, and that commercialism tends to bring with it an element of cynicism too.
Most derivative games are not very interesting or memorable. Unless you bring something new and interesting to the table, the best result you can hope for is that gamers buy and play your game while waiting for the next ‘big thing’ to grab their attention.

Sometimes a derivative game can be a little inventive. They might find a fresh angle on an existing type of game. The classic example of this is Sonic the Hedgehog: Sega were deliberately aiming to develop their own platform game to rival Super Mario Bros, but they developed it by looking for contrasts. Sonic is blindindly fast while Mario is careful and measured. He’s spiky and ‘cool’, while Mario remains rounded and ‘safe’. Despite being a derivative work (and pretty much every platform game ever developed is a derivative work of Super Mario Bros), Sonic the Hedgehog finds a new angle and becomes a new game.
Other games might draw elements from several preceding works, blending them together in the attempt to generate something new. Sure you’ve seen all of the individual elements before, but you have never seen them re-assembled in such a fashion. This is a risky strategy to take, since very often disparate game elements don’t actually work that well together. On the other hand, quite often something genuinely fresh and entertaining can result from it. I always liked Ridge Racer Type 4, which introduced a light narrative element to an arcade-style racing game. The core gameplay from previous Ridge Racer titles remained, but now there was a little story to work through as well. It was a great touch – I still play Type 4 from time to time, certainly more often than I do any of the subsequent Ridge Racer titles. 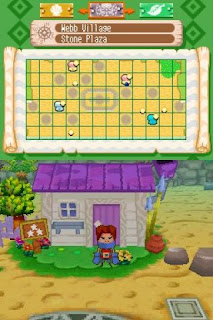 The latest ‘blended’ genre game that I’ve played is Away: Shuffle Dungeon. It’s an action-based role-playing game (RPG) for the Nintendo DS, high on arcade-style play and narrative but low on menus and strategy. It’s one of the most shameless constructions I’ve seen in ages, since pretty much every part of its design and look can be drawn back to a pre-existing title. Despite this, it’s very enjoyable to play.
You control a boy named Sword, who washed ashore some time ago on the beach near Webb Village. He doesn’t remember where he came from, but he’s made his home in Webb and befriended all of the other villagers. The villager, however, is cursed by a mysterious magical entity known as the Away. Once a year the Away steals one of the villagers, who vanishes without a trace and never returns.
At the game’s opening, the Away comes from Sword. As his body rises into the mysterious light of the Away, a girl from the village – who is in love with Sword – begs it not to take him. She promises she’ll do anything if it spares Sword’s life. So the Away takes the girl instead, and the entire village as well: people, homes and buildings included.
Starting out on his own in an empty field, Sword must track down magical portals into a series of cave-based dungeons. At the end of each dungeon he can rescue a villager and bring them back to begin reconstruction of the village.
There are basically two game areas to play in. The first are the dungeons, which are two-dimensional levels viewed from a top-down perspective. The player guides sword through a series of little mazes, each littered with monsters, switches, sliding doors and treasure chests. It is, for all intents and purposes, The Legend of Zelda. In many ways it is a shameless appropriation of Nintendo’s classic action RPG. Away: Shuffle Dungeon does bring one new element to the table, and it’s one that completely vitalises the dungeons sections of the game. As the title suggests, they are ‘shuffle’ dungeons. Each dungeon level – there are usually three or four in each dungeon – is split across the DS’ two screens. At certain intervals, one half or the other will rumble, shake and then spin out of view, replaced by an entirely new section of dungeon with a completely different layout. Navigating the dungeons thus becomes a strategic act. Treasure chests might be sealed by a sliding door, which requires the flicking of a switch, but you can only access the switch by crossing down into the other screen and back up again. Cross screens and a three-second countdown might begin for the first screen to shuffle out of view. Get caught on a screen when it shuffles and you lose health and find yourself thrown back to the beginning of the level. 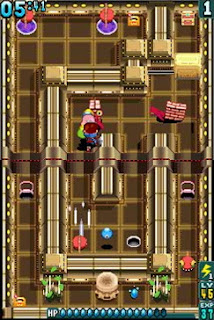 Away: Shuffle Dungeon takes a pre-existing and popular game form and adds something innovative. It repurposes The Legend of Zelda and transforms it into a new experience. It’s a very arcade-like experience, since the constant shifting from one screen to the other brings a level of constant tension and ‘twitch’ gameplay that simply doesn’t exist in Nintendo’s Zelda titles. It is also far more simplistic, which is either a plus or a minus depending on what sort of game you feel like playing at the time.
You are assisted in your dungeon forays by ‘fupongs’, round blob-like creatures that can cast offensive and defensive spells. Different colours of fupong cast different types of spell. Up to six of them can trail behind you at a time, leading to one of the game’s major failings: you can’t select what spell you’re about to cast. The order of spells you cast is determined by the order of fupong walking behind you, so if you want to cast a shielding spell and the shielding fupong is fourth in line, you are going to need to burn through three fireballs or lightning bolts before you reach it. It’s an irritating problem, and mars an otherwise enjoyable dungeon-hacking experience.
Reach the bottom of many of the dungeons and you’re thrown into a three-dimensional boss fight, with Sword facing up against a variety of large monsters. Here the gameplay is stolen from the latter Legend of ZeldaOcarina of Time. Each monster has a glowing red spot on its chest. Work out the sequence of its attacks, weave between them and hit the red spot. Repeat the process until the monster falls down. It’s not a particularly imaginative process. To be honest I think the game would have been much better served by keeping all of the boss fights in two dimensions just like the dungeons. The switch feels forced. A similar problem cropped up in Sega’s Nintendo DS title Sonic Rush: the levels were in 2D and the boss fights were in 3D, and the shift jarred with me every time. titles, typified by the Nintendo 64’s
The second major game area is Webb Village. As Sword rescues each villager, their home and shop are rebuilt. Sword can purchase items from the shops as they are restored, leading to that classic trope of the dungeon-hacking game: the village where you spend the money earned from hacking at monsters to purchase more efficient tools for hacking monsters.
In terms of visual look and design, however, Webb Village is derivative of a completely different Nintendo title. It is, for all intents and purposes, Animal Crossing. The weird barrel-style three-dimensional perspective is identical, the cliff-like boundaries are identical, and the character designs are, while not animals, highly reminiscent. There’s also a strong hint of The Legend of Zelda: The Wind Waker about Webb’s population. It’s an effective enough look, and completely suits the slightly humorous, light-hearted tone of the characters, but it’s jaw-droppingly blatant.
Between the two game areas there is a very enjoyable videogame. The games it copies from are good games, and the fresh elements it brings (particularly the shuffling dungeon levels) are striking and effective. This game didn’t grab too much attention when it was released – it came out in October 2008 in Japan and the USA, and April 2009 in Europe – but it’s a nicely understated gem.
The game was developed by Mistwalker, the Japanese development studio founded by Final Fantasy creator Hironobu Sakaguchi after he resigned from Square. Mistwalker have struggled to release a break-out game since they were established in 2004. They produced two high-profile RPGs for the Xbox 360. Blue Dragon, with its character designs by Akira Toriyama, looked like Dragon Quest and played in a bit too simplistic a fashion. Lost Odyssey looked and played like Final Fantasy, but did manage to include a slightly strange and intriguing series of text-based short stories as part of the experience. At present Sakaguchi is developing The Last Story, another Final Fantasy-esque RPG – this time for the Nintendo Wii.
The character designs are by Naoto Oshima, which was a surprise to learn. As I mentioned before they seem highly derivative, yet Oshima is one of the most prolific character and game designers in Japan. He originally worked for Sega, where he designed the Sonic the Hedgehog character. You can also find his name attached to design roles on the likes of Phantasy Star, NIGHTS Into Dreams and Burning Rangers. Oshima left Sega to help found the Artoon development studio, who co-produced Away with Mistwalker.
The game’s pleasant musical score is the work of Nobuo Uematsu, who famously scored most games in the Final Fantasy saga.
So as I mentioned, Away: Shuffle Dungeon is a very enjoyable game. The problem comes when you take a look at the development team. This was a collaboration between the producer of Final Fantasy and the designer of Sonic the Hedgehog. While the game is fun to play and a pleasant distraction, it simply doesn’t measure up against the heritage of its creators. Derivative games are released every week, and as players we’ve grown to accept that and enjoy the ones that are good, but the problem I’m left with in Away is that it’s the work of developers who should know better. More than that, they should design better. They have demonstrated a capability to come up with interesting ideas, and vivid characters, and memorable, enduring gaming experiences. With all of that in mind, Away is left feeling shockingly mediocre.
It’s a shame: with a less derivative look and feel, I think Away: Shuffle Dungeon could have been something really special.
Posted by Grant at 9:15 AM