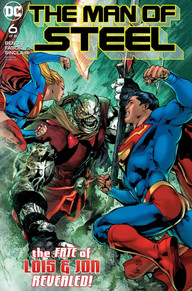 The Man of Steel hits its sixth a final issue, which means wrapping up the immediate crisis of Rogol Zaar's attempt to blow up the Earth to kill Superman as well as revealing precisely what has happened already to cause Lois and Jon's absence.

The Rogol Zaar section is straight-up superhero action, as Supergirl assists Superman in defeating Zaar before his plan comes to fruition. It is very well illustrated by Jason Fabok, with a lot of pace and energy. That really is all backgrounded, however, in favour of Lois and Jon, and that's kind of where the issue struggles a little.

Superman's father Jor-El has arrived once again (oh yeah, he didn't die on Krypton after all), insisted on taking his grandson Jon around the galaxy to better train him in how to be a better super-human. Clark and Lois debate whether or not Jon should go, and ultimately Lois accompanies him on the voyage. After the terrible acts performed by Jor-El in his previous appearance, one would assume the idea of handing him your son would be unimaginable. Instead Lois and Jon willingly go with him, and Clark reluctantly allows it all to happen. It gets them out of the way for whatever ongoing story Brian Michael Bendis has in mind, but it's an awkward process and feels very badly shoe-horned in. It's not a great sign for the immediate future of the Superman ongoing titles. (3/5)

Under the cut: reviews of Doctor Strange, Doctor Who: The Seventh Doctor, and Sword Daughter.

Only three issues into this new volume and it's already been subsumed by one of Marvel's pervasive mega-crossovers. On a deep space colony of Skrulls, Stephen and his new travelling companion Kanna discover a Skrull magician in possession of an Infinity Stone. The art is great in this issue, and while I appreciate Mark Waid's talents as a writer, the heavily narrated past-tense storytelling feels a little weak. The same stories could easily be told in a more immediate fashion - and that would work to make the book feel much stronger. (3/5)

Doctor Who: The Seventh Doctor #2

The Doctor, Ace, and the ICMG are trapped in the Australian outback with a radioactive cloud fast approaching. The quality that sustained the first extended issue of this three-part series also sustains the second; Andrew Cartmel writes a story that is pitch-perfect in matching the final years of Doctor Who's first television iteration. Christopher Jones captures the characters and settings incredibly well. The back-up strip continues to struggle a little, but there is an immediate improvement on the first issue. (4/5)

There is viking action aplenty in this second part of Brian Wood's latest miniseries. Elsbeth and her father continue their voyage to destroy the Forty Swords gang that destroyed their lives a decade ago. On their way they find themselves in Shetland, where 12 people and counting have been murdered. The pace is calm and purposeful, the period detail is effective but unobtrusive. The storytelling - particularly Wood's use of Eslbeth's non-verbal nature - is excellent. Wood knows his stuff, and he tells this viking stories exceptionally well. Mack Chater's realistic artwork and Jose Villarrubia's soft, cold colours are the icing on the cake. (4/5)
Posted by Grant at 9:13 AM