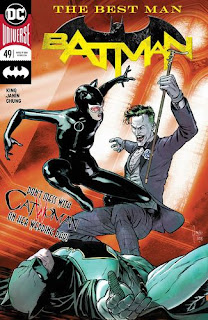 In the last issue of Batman, the Joker tried to hold an entire church of worshippers hostage so that he could ask Batman where his wedding invite was. It was a superb single-scene issue, showcasing a conversation between hero and villain. This latest issue provides the second half: a bomb's gone off, Batman is unconscious, and Catwoman swings into action for a one-on-one all of her own.

It is truly superb: this two-part prologue to the forthcoming Bruce-Selina wedding is insightful, clever, beautifully thought-out, and emotionally powerful. While the last issue focused on Batman's direct relationship with the Joker, this issue focuses on the Joker's relationship with other other Gotham City villains - and what it means to be Batman's enemy.

Mikel Janin and June Chung's visuals make excellent work of what could be a visually limited story: two badly injured people talking with one another while both running risk of bleeding to death. Together I think they're the best storyline so far for Tim King's Batman. (5/5)

Under the cut: reviews of The Avengers, Justice League, The Man of Steel, and Star Wars: Poe Dameron.

It still strikes me as so weird that both The Avengers and Justice League relaunched with cosmic stories about giant alien creatures from beyond the limits of reality coming to Earth. Thankfully both comics have veered into their own specific directions soon afterwards. Here at The Avengers the story has shifted to Loki, monsters beneath the Earth's surface, and the original Avengers from Earth's prehistory. It's all kind of neat, even if the new Avengers line-up doesn't feel ideal (Ghost Rider? Really?) (4/5)

Superman and Martian Manhunter prepare to enter the Totality. Lex Luthor assembles his new Legion of Doom. Jon Stewart encounters an unexpectedly transformed Sinestro in deep space. The scale of this new volume of Justice League is honestly off the charts: multiple threads, dangers emerging from outside of the entire universe, big hitters among both heroes and villains joining together. It's superbly written and illustrated, but most importantly this is exactly the epic sort of complex mad adventure that we should have in a book about the Justice League. (5/5)

There's plenty of plot developments in this fourth issue, alleviating one of the key problems in the previous week's issue. We get some proper answers - including what or who it is threatening Lois and Jon in all of those flashbacks. A nice guest appearance by Green Lantern lifts up the middle section. I am still not convinced by the series' deliberate use of rotating artists; I get that it's an attempt to showcase famous artists and add their names to the series for marketing purposes, but the visual inconsistency is going to weaken the completed work. This is a good series, but to be honest I couldn't call it great. (3/5)

The tedious flashback to tell Poe's side of The Force Awakens reaches its conclusion at last, and segues immediately into a cliffhanger over the fate of Poe's Black Squadron. Between the two it really drives home Poe Dameron's biggest problem: its characters are boring. The regular Star Wars comic runs on the back of Han, Luke, Leia, Chewbacca and so on. Darth Vader speaks for itself. Doctor Aphra has its own original and hugely entertaining protagonist. Poe Dameron and Black Squadron are ultimately rather dull. I don't enthuse about what happens to them next. Given the wide scope of available character from Star Wars, Marvel could pick a much better subject matter for an ongoing book. Thankfully they seem to have finally worked that out: in three issues Poe Dameron is getting cancelled. (2/5)
Posted by Grant at 11:50 AM