Doctor Who: "The Web Planet" 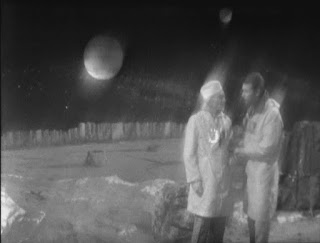 The TARDIS is dragged down by an unknown force to a seemingly desolate and rocky planet. Unable to break free, the ship remains trapped. Giant ant creatures lurk outside. A piercing noise in her head incapacitates Vicki (Maureen O'Brien). The Doctor (William Hartnell) and Ian (William Russell) head outside to explore. Soon the piercing noise returns, and Barbara (Jacqueline Hill) leaves the ship alone under some form of mind control.

Doctor Who enters into a new serial with the strangest goings-on since "The Edge of Destruction" all the way back near the beginning of Series 1. Vicki falling under a trance, Barbara succumbing to mind control, glimpses of giant ant people - it's all weird and off the wall stuff, particularly since it follows directly on from a four-episode comedic farce in "The Romans".

Here's a phrase that's likely to come up a lot over the next six episode reviews of Doctor Who: you have to admire the ambition. When the Doctor and Ian step out onto the surface of what we shall learn is the planet Zortis, it's onto the most alien surface the series has yet attempted. The night sky is filled with moons. There is craggy rock underfoot that stretches all the way to some cliffs on the horizon. There are acid pools littering the landscape. In reality it's a small London TV studio decked out with painted backdrops and polystyrene rocks. It is hilariously unconvincing, and shows a serial with eyes much bigger than its budget. Poor director Richard Martin does his best, but he's working from an impossible script here.

That goes double for the Zarbi - black human-sized ants that crowd and shake the TARDIS upon its arrival. There's an inevitable 'pantomime horse' aesthetic, that was unavoidable without resorting to prohibitively expensive macro-puppetry. On one level they're the exact sort of cheap, wobbly element for which the series got mocked during its original run. On the other it's amusingly bold of the production team to try featuring the Zarbi at all. As I said: you have to admire the ambition.

Story-wise the episode is all mystery and no resolution, leading the viewer to want to keep watching just to find out what exactly is going on. For one thing there isn't anybody even remotely human encountered outside of the ship. Of all the science fiction stories, this one already seems the most alien. It's not the strongest opening episode to date, but it's certainly the strangest. "The Web Planet" is the fifteenth good episode of Series 2 out of sixteen to date. This second year of Doctor Who is on fire: the quality ratio rises to 94 per cent.
Posted by Grant at 6:42 PM