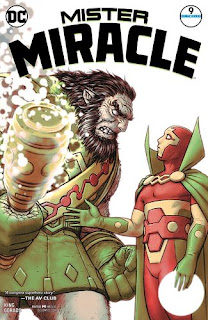 With the war against Apokolips reaching a cease-fire, Scott Free and Barda sit down to negotiate peace terms with Kalibak. The offer from Apokolips, however, may just be too high for Scott to accept.

Mister Miracle has been an absolute stand-out for DC Comics since it commenced nine months ago, combining a smart, complex script by Tom King with stunning and innovative art by Mitch Gerads. There is an insidious sort of underlying threat that has run beneath the entire book, and as the series marches towards its 12th and final issue the truth of what that threat actually is feels viscerally close. It is remarkable how tense everything is becoming.

Tom King is really demonstrating himself as DC's most valuable creative at the moment, with his intelligent and provocative work both here and in Batman. He's become one of those writers whose work you simply buy and read regardless of subject matter. This series has been pitch-perfect, and as it enters its final stretch it is difficult to imagine it's going to falter now. (5/5)

Under the cut: reviews of Copperhead, Mech Cadet Yu, Oblivion Song, and Port of Earth.

It's great to see co-creator Scott Godlewski back on art duties for this fresh story arc. The indigenous species outside of Copperhead is suddenly on the move, and that's creating a lot of ominous foreshadowing for the issues to come. After the climactic events back in issue #18, this issue feels like a fresh start for the book - and an easy jumping-on point. It's worth it: the characters are engaging, the dialogue on point, and Godlewski's art is tremendous. This is a rare event: a space western that actually manages to pull it all off. Goodness knows enough people have tried. (4/5)

The mech cadets have disobeyed orders, headed into space and challenged the Sharg mothership before it can reach the Earth. Dog-fighting giant robots versus big aliens? Passionate melodrama from the cockpit? Shock turns of events? Life or death choices? Quite frankly the only thing this issue needs is a song from Macross' Lynn Minmei. Pak and Miyazawa's robot anime tribute hits exactly the right buttons this issue; it's the exact sort of issue for which the comic exists at all. (4/5)

Oblivion Song has a minor wobble with its fourth issue. Put simply, the story doesn't really progress any further. We know that people brought back from the alternate reality struggle to reintegrate with everyday life. We know that Nathan is trying to find his brother. This issue simply feels like wheels spinning to fill out the eventual trade paperback collection. I'm also still on the fence in regards to De Felici's artwork; the story feels like it needs a more realistic or moody art style. De Felici seems to bring something more suitable to a lighter, breezier tone to me. (3/5)

The decision to frame the story of this science fiction thriller within a television news broadcast is a smart one; there's something very addictive about reading two pundits on-screen discussing something terrible happening and then flashing back to show the terrible event occur. The stakes have also been raised very cleverly from issue to issue, particular when one of the TV identities brings one of the protagonist's mental health into question - suddenly the events in the past take on a fresh urgency. Andrea Mutti's artwork is great on this; it's the kind of style that would suit Oblivion Song (above). (4/5)
Posted by Grant at 9:04 AM