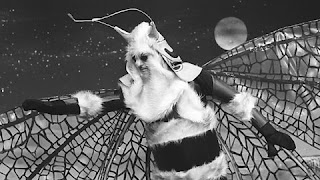 It is 20 February 1964, and time for the second part of the Doctor Who serial "The Web Planet".

On the planet Vortis, the Doctor (William Hartnell) and Ian (William Russell) continue exploring the surface before being captured by the ant-like Zarbi. Meanwhile Barbara (Jacqueline Hill) finds herself captured by the Zarbi and the Menoptera, butterfly-like humanoids whom the Zarbi are hunting into extinction. Vicki (Maureen O'Brien) is still in the TARDIS, which the Zarbi then drag into their lair.

There is something quite impressive about this episode, which presents Doctor Who's first genuinely alien planet. There is no one here outside of the regular cast that looks in any way human. The ant-like Zarbi stumble around like drunk pantomime horses, and while the bee-like Menoptera have humanoid bodies, they are buried under bee masks and wings. I'm straining to remember for certain, but I'm pretty sure Doctor Who never tells a story so devoid of humans (or their analogues) ever again.

Proper effort has been made to give Vortis an otherworldly look. The planet scenes are shot through a lens smeared with vaseline - or at least that appears to be the effect. Everything looks a little blurry and out-of-focus. The execution is about as wobbly as Doctor Who gets, but the effort is palpable and does occasionally work rather well. Sadly the parts that don't work linger more in the memory. In short, if you are looking for a Doctor Who to enjoyably mock, "The Web Planet" is one of the very best options. The Zarbi are simply too clunky to take seriously, while the Menoptra shamble about like awkward teenagers in a Rock Eisteddfod.

It is nice to see the series playing a little with scientific ideas. The Doctor and Ian share a conversation about how their atmospheric density jackets work that actually makes the odd lab coats feel semi-believable. That said, logic goes out of the window in other scenes. The Doctor thinks he recognises the planet as Vortis - save for the numerous moons that orbit above them. It is unintentionally hilarious that, rather than make the fairly logical assumption that it's not Vortis, the Doctor and Ian immediately wonder how Vortis got so many new moons out of nowhere. Sure the planet actually is Vortis, but it's still a bizarre assumption for them to make.

Hartnell feels distinctly off-kilter in this episode, stumbling over his lines and leaving odd vague pauses long enough to reverse a truck through them. Conversely Maureen O'Brien is rather impressive as Vicki. When initially menaced by Zarbi she doesn't scream or panic - although she is certainly fearful. It's only when threatened by them more forcefully that she lets out a terrified cry. Vicki is often maligned as a rather lazy copy of Susan, but in all honesty she is a better character performed by a stronger actor.

This episode is terrible - the practicality of the piece simply lets it down, because the intended spectacle isn't very spectacular. At the same time it's wonderful, because it's so strange and near-hypnotic. It gets the thumbs-up from me, leaving Series 2 with 16 good episodes out of 17 so far. The quality ratio rises to an incredible 94 per cent. At this stage it seems a safe bet to claim that in its second year Doctor Who was even stronger than in its first.
Posted by Grant at 12:27 PM