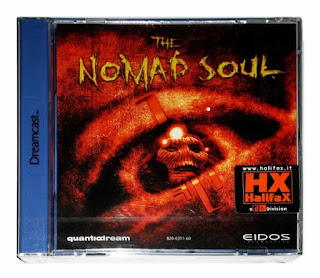 In the alien city of Omikron, the player assumes the role of a police detective investigating a string of serial killings. When that detective is killed, however, the player begins a string of reincarnations from body to body while uncovering a supernatural war running out of sight for thousands of years.

Released in 2000 to decidedly mixed reviews, Omikron: The Nomad Soul was an adventure game with varied gameplay - some action, some puzzle-solving - with the original wrinkle of reincarnating the player's character as a different person each time they die. The universe created for the game is imaginative, and for 2000 it seemed like a pretty imaginative one. 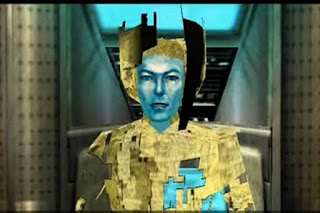 The game's real asset, however, is David Bowie. Omikron's director David Cage had a list of musicians whose songs he wanted to include in his game. When David Bowie, fascinating by the possibilities of virtuality and videogaming, volunteering to provide more than a song.

The game boasts exclusive remixes of several songs from Bowie's album Hours. It also features a couple of tracks that were largely exclusive to the game - unless you were buying limited edition Japanese CDs. Even better, Bowie appeared in the game in two separate roles - one of them as the lead in an Omikron rock group alongside a virtual version of regular musical collaborator Reeves Gabrels. You could even buy a CD in-game from the band and play it on the CD player in your virtual apartment.

Omikron: The Nomad Soul is an imperfect game, but it's also a fascinating and innovative one. With the Bowie connection I simply couldn't resist picking it up.
Posted by Grant at 1:29 PM