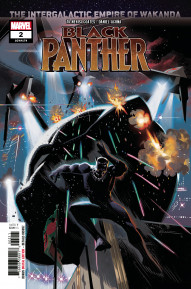 It is genuinely odd, given the success of Black Panther in cinemas this year, that the response from Marvel Comics is not simply to relaunch the book with a new volume (sensible enough) but to relaunch it as a far future Star Wars-esque space opera with a whole new generation of namesake characters flying around in space fighters in battle with a galactic Wakandan Empire.

Of course it's a great and fresh take on the property, with a fast pace and a huge imagination in re-working old elements in new ways. This issue is dominated by a space dogfight, which could potential be a one-note bore. Instead writer Ta-Nehisi Coates uses it to express T'Challa's character and temperament.

The real star, however, is artist Daniel Acuña. His strong use of Afro-futurist imagery, and effective design, provides a rich enhancement to Coates' story. The book looks tremendous, and has a definite 'big budget' kind of blockbuster look to it. It's a strangely timed book, but absolutely a very welcome one. (4/5)

Under the cut: a bumper crop of mini-reviews focused on Batgirl, Descender, Invader Zim, The Man of Steel, Mera: Queen of Atlantis, and Star Wars: Doctor Aphra.

This is a nice one-shot adventure for Batgirl. It's got a mystery, a surprise, and a regular Batman villain all in the space of 20 pages. Spread out across all of that are numerous examples of Barbara Gordon at her best: she investigates, she punches criminals, and she engages in a high-speed motorcycle chase. I really liked Scott Godlewski's artwork as well, which gives the characters a nicely cartoon-like appearance without seeming too exaggerated or over the top. This is the sort of superhero book that reminds you why you loved comics so much as a kid. (4/5)

Andy, Telsa and Tim are trapped on the giant harvester, as the war reaches its peak and the Descenders finally arrive. The advantage of a long-running narrative is that the stakes can rise to astonishing levels if you keep raising them. That's certainly the case here, with a machine-versus-human war now threatening to wipe out all life across the entire united systems. Lemire writes a script that's high in emotion, and Nguyen illustrates it wonderfully. The cliffhanger is excellent, leading into the final issue of this series next month. (4/5)

Dib goes hunting after a strange bird, leading to a surreal underground adventure. Invader Zim continues as Invader Zim does, with each individual issue ranging between the good and the mediocre but without ever reaching excellent or dropping to outright terrible. It does what it does. This issue benefits from K.C. Green's distinctive art style, which provides an odd little take on Jhonen Vasquez's original designs. It's broadly a fun diversion, but as always unless you're a big fan of the cartoon there are much better books to spend your money on. (3/5)

Superman's fight with Rogol Zaar hits a temporary pause, as Superman's friends come to the rescue. More consistent artwork helps to push this issue along, including some great action beats that really jump off the page. I'm wondering if the generally subdued response to this miniseries is due to unrealistic expectations. DC promised a big, game-changing miniseries with a big-name writer, and gave it the same title as John Byrne's big, game-changing miniseries from the 1980s. Instead it's just a Superman story arc. This could have easily been six issues of Action Comics. (3/5)

Mera continues in her quest to persuade Xebel to join in the fight against the mad Atlantean king Corum Rath - but can she trust Orm to remain on her side? This miniseries has continued in a fairly straight-and-narrow trajectory. It ties it well enough to Aquaman's long-running Corum Rath storyline, it gives Mera the story focus, and it tells a generally entertaining story. It doesn't feel necessary, however, and that - like The Man of Steel above - kind of puts a dampener on things. (3/5)

Aphra remains stuck on an Imperial prison ship, and her only hopes of escape lie in the Imperial officer with whom she's formed an ill-advised romances and in an ex-girlfriend who may resent her too much to help. Kev Walker's artwork remains a key draw here, and as Si Spurrier takes over from Kieron Gillen as writer the combination of comedy and action is carefully maintained. What is impressive is that the book also develops well-considered story threads as well - it will be interesting to see what the truth is being the strange ghost seen on the prison ship. Is it a Jedi spirit, or something else entirely? (4/5)
Posted by Grant at 4:58 PM