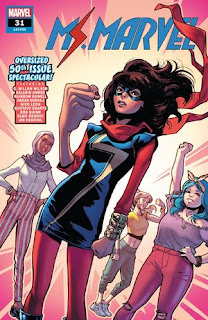 This month marks 50 issues since G. Willow Wilson's awesome character Kamala Khan has featured in her own comic. Never shy to celebrate an anniversary, Marvel presents a festive jam piece of writers and artists; still led by Wilson, but with plenty of support as well.

Kamala's attempting a sleepover with her friends from high school, one that gets persistently interrupted by other heroes needing help, small-fry villains demanding a fight, and other secret complications. It's a cute framing device that allows the issue to work in vignettes by different creatives, each of them brief enough to sustain the novelty without feeling forced or tedious. Some work better than others, but as a one-off comedy issue it's all pretty enjoyable.

That said, Marvel's current attempt to simultaneously number their comics by both issue of the current volume and issue of the entire legacy series is weird. This book is issue #31, but it's also issue #50, but to be accurate (Ms Marvel didn't start with Kamala Khan) it should be issue #123. Marvel need to decide how they're counting these things and stick with it. The pedants in the audience are growing frustrated. (4/5)

Under the cut: reviews of Detective Comics, Harbinger Wars II, Saga, The Terrifics, The Wicked + the Divine and X-O Manowar.

This issue was actually published back on 13 June, but a shipping delay means I'm only getting to it now. This one's a one-shot, which is quite the palette-cleanser after James Tynion IV's length two-year "Batmen" epic that's dominated the title since the DC Rebirth relaunch. It brings back the spectral villain Deacon Blackfire, which is a great choice, but it ultimately fails to do much that is truly interesting with him. Fortunately the issue is blessed with some excellent and atmospheric art by Sebastian Fiumara that boosts its appeal considerably. (3/5)

New regular writer Bryan Hill kicks off with a bang this week, with Duke Thomas getting badly injured in an explosion, and Bruce approaching Black Lightning to assist with the investigation. It's well plotted, nicely characterised and does a nice job of keeping Tynion's focus on Batman alongside his supporting cast rather than simply fighting crime alone. Miguel Mendonca and Diana Egea provide some nice traditional superhero artwork as well: nothing spectacular and innovative, but well laid-out and easy on the eye. This new run is off to a hugely promising start. (4/5)

The latest Valiant crossover continues as government-backed superheroes are sent to restrain the growing community of so-called 'psiots'. If you read superhero comics, then you know the drill: heroes take sides, and wind up having to fight one another. As Valiant's effective Civil War, it's worth noting that it's so far doing a much better job than Marvel did. A lot of that is down to Giorello and Guedes' absolutely beautiful artwork: rich, painterly and incredibly detailed, it's pretty much the best comic book art I think I've seen this year. (5/5)

We've reached that traditional 5th issue of a story arc where the stakes are raised and the body count of beloved characters is growing. Despite this ongoing cavalcade of murders, it still manages to shock every time. Fiona Staples' artwork seems particularly effective this month, while a key sequence early on manages to push the story forward outside of the small, intimate family developments that had dominated recent issues. It's great to have the Will back in action, while Prince Robot continues his odd turn as one of the book's most fascinating characters. It's all leading to another arc finale in July, but even on its own merits this issue represents Saga at its very best. (5/5)

Mr Terrific undertakes further testing. Plastic Man struggles to reconcile with his ex or see his child. Something dangerous happens in Michigan. I am not wowed by The Terrifics, but at the same time I can't deny it has a peculiar old-fashioned charm to it. The characters are solid second-stringers who seem to work okay as a team, the overall tone is refreshingly bright, and its creative team are clearly having fun making it. It just ultimately does not feel particularly necessary: without a core reason to exist, I can see readers fleeing this one within the first 12 months. To its credit, the four panel layout of early scenes works brilliantly. (3/5)

Quite how a comic book manages to simultaneously have so much popular and arthouse appeal continues to impress. The arthouse side of this issue presents a deliberately repetitive beat performed for a huge dramatic effect. The populist side features arguably the best art of Jamie McKelvie's career: a god-on-god fight in the London Underground that just floored me with its layout and design as well as the actual artwork itself. Between the two this issue makes a tremendous impact. It isn't just one of the best comics on the market; it honestly feels better than we deserve. (5/5)

With Aric busily engaged in Harbinger Wars II, his regular title is in a holding pattern of flashbacks and back story. To the credit of the creative team, it's got a huge amount of appeal - ancient history, sword-fights, and a strong sense of mythology - but if readers are expecting something involving Aric's alien super-suit they will be a little disappointed. I love it: Hairsine and Thies' artwork is predictably stunning to look at, and it's providing a wonderfully lyrical bit of history to the protagonist. (4/5)
Posted by Grant at 11:36 AM