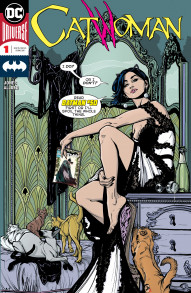 Spinning off from the events of Batman #50 comes an all-new volume of Catwoman, featuring its first-ever all-female creative team of writer/artist Joelle Jones and colourist Laura Allred.

While attempting to lie low in Mexico, Selina Kyle is in trouble with the law once again - not for anything she has done herself, but because of the two police officers shot dead by an apparent copycat. Despite having enough issues on her own, she is reluctantly dragged back into costume again.

Joelle Jones has been doing sensational work with Tom King over in Batman, and Laura Allred is a well-established and strong talent in colouring, so the visuals of this new ongoing were never in doubt. Nicely dense panel layouts get a lot of story into one half of the book, while the other half loosens out to accentuate the action. It's a superb balance, and the art and colours match the slightly grittier aesthetic that Jones has chosen.

The big surprise is in the writing: Jones absolutely nails both the story - it's intriguing and intelligent - and the characters. It gives Selina a great sense of both agency and humanity. This is a superb opening chapter to what I suspect will be a big success. (5/5)

Under the cut: reviews of Giant Days, Justice League, and Prism Stalker.

Artist Max Sarin returns to Giant Days just as poor Ed Gemmell - laid out in hospital after drunkenly breaking both ankles while professing his love for Esther - returns home. It's awkward as all hell, but ultimately a wonderfully warm piece about the two characters trying to move on and restore an uncertain friendship. It's why I have such a strong affection for Giant Days. The comic may seem like a book for jokes and satire about university living, but it's also a surprisingly touching character drama. I'd say it's the comic book market's best soap opera, but that implies it isn't good. It's great. (4/5)

Remember when Greg Rucka expanded the Green Lantern universe by introducing Yellow Lanterns? Then Red, Orange, Indigo, and even Black and White Lanterns? At first it seemed a really cool idea, but then as the books started to resemble a United Colors of Benneton catalogue there was at least the satisfaction that he had run out of colours of the rainbow to turn into intergalactic super-powers? It's as if Scott Snyder has rolled into down, muttered something along the lines of 'amateur' and introduced the Ultraviolent Lanterns - with the promise of another six secret colours on the horizon. It's ridiculous. In the context of this elaborate cosmic - and almost Lovecraftian - storyline, it weirdly works very well. This is complication, busy stuff, but it all flies past so fast it's easier just to embrace the craziness and enjoy the urgency of it all. Jorge Jiminez's artwork is fabulous, the characters are sparking well off one another, and the growing presence of Luthor's Legion of Doom gives it all an old-school superhero vibe that I absolutely adore. (4/5)

Vep's training continues while stakes are raised, and conflict builds among the other trainees. While I've been enjoying the surreality of Sloane Leong's odd science fiction adventure, things feel as if they've slipped a little this issue. The oddness remains, as does the vivid colouring, but the story slows down and begins to feel a little like Leong is treading water. The book still has its distinctive tone and aesthetic, but there's a slightly underwhelming feel this month. (3/5)
Posted by Grant at 2:28 PM