Star Trek: Deep Space Nine: "Nor the Battle to the Strong" 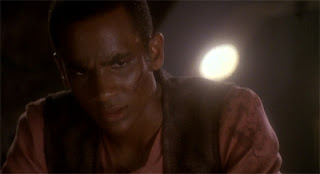 It is 21 October 1996, and time for another episode of Star Trek: Deep Space Nine.

Dr Bashir (Alexander Siddig) and Jake Sisko (Cirroc Lofton) are travelling in a Runabout when they receive a distress call from a Federation colony. A splinter faction of Klingons are attacking the base, inflicting heavy casualties. Jake is keen to visit to get material for his developing writing career, but Bashir is reluctant to put him in harm's way. Reluctantly arriving to assist in the colony's makeshift hospital, Bashir does his best to assist while Jake is confronted with the real horror of war.

"Nor the Battle to the Strong" feels like it's about a month late - war with the Klingons ended four episodes ago - but it still works as both a relatively strong war story and a showcase for Cirroc Loften's Jake Sisko. It also provides a rare team-up between Jake and Bashir - a pairing that works so effectively it's a shame it isn't really done again.

Jake is arguably Deep Space Nine's most undervalued element. Star Trek tried featuring a juvenile lead before with Wesley Crusher (Wil Wheaton), but in that case the writer's room rebelled and sabotaged their own character to point where Wheaton wisely got out of dodge before the scripts demeaned him any further. Jake is a much better developed character - he's not a child prodigy, and he's not an overly earnest Starfleet wannabe - but at the same time there's still a general reluctance to embrace his character. That's a shame, because he offers the best audience viewpoint that the series has; he's the one ordinary person in Deep Space Nine's extraordinary world.

Cirroc Lofton is great in this episode, which really puts Jake through the emotional wringer. He sees people die, or in agonising pain. He sees blunt medical trauma and gore, and struggles to cope. When he and Bashir are shot at by Klingons while racing for supplies, he freaks out and bails. Even in the episode's climax, when he is falsely praised as a hero, Jake is forced to admit his actions were provoked by what he sees as cowardice - but what others recognise as very understandable fear for his life.

Bashir turns out to be a superb foil against which to bounce Jake's story, because he can operate effectively as a big brother. They are closer in age that Jake would be with most other regular characters, and Bashir immediately takes on a light but still protective relationship with him. It is such a rewarding piece of work by Siddig and Lofton that it is a real shame that further storylines between them weren't pursued. That's the problem with a writer's room that doesn't value one of their best assets.

Three good episodes out of four for Season 5, and this is definitely the best one. The quality ratio rises to 75 per cent.
Posted by Grant at 12:23 PM