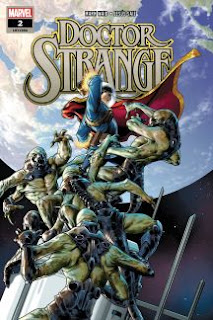 The second issue of Mark Waid's relaunched Doctor Strange feels a lot stronger than the first: with the slightly improbably set-up of Tony Stark sending Stephen Strange into space out of the way, the story can now move to developing a new setting, a supporting cast, and an exploration of what magic means in the Marvel Universe when you're surrounded by aliens, spaceships, and ray guns.

Waid always tends to have a strong handle on plot and character, and he's working much better now that he actually does that and not foreshadow his series via a narration-dominated prologue. New characters work well, and Strange reacts to his imprisonment on another planet in a manner that rings true. Jesus Saiz's artwork is excellent, and wonderfully detailed.

I swear you can feel the hand of Marvel Studios pulling the strings, though. With the huge runaway success of Guardians of the Galaxy and Infinity War in cinemas, this all feels like a dry run for Benedict Cumberbatch to take to the skies in future years for an intergalactic adventure. Based on this first proper issue, that hypothetical sequel just might work. (4/5)

Under the cut: reviews of Batwoman, Delta 13, Punk's Not Dead, and The Wild Storm.

"The Fall of the House of Kane" concludes without any actual fall for the Kanes, but it does at least bring the second Batman-versus-Batwoman conflict this year. All of the standard caveats with this book remain - it's never engaging fully, it's perennially obsessed with Kate Kane's tragic back story, all roads lead to her villainous sister, and so on - but for this issue at least it's also dramatic, exciting and well paced. It's nice to see it improve, but sadly the next issue is about Kate reconnecting with her ex-girlfriend Renee; I guess the obsession with her past is continuing a while longer. (3/5)

A crew of space salvagers discover something unexpected inside a massive asteroid - and now that they've discovered it, what should they do with it? The selling point for this book is Neil Jones' near-monochromatic and wonderfully atmospheric artwork. Sadly it's being let down by a profoundly lazy Steve Niles script that thus far has basically aped dialogue and story elements from Ridley Scott's Alien - and nowhere near as effectively. Ultimately it all feels rather disposable: pretty to look at, but very far from an essential read. Niles can do a lot better than this; even if the story improves he's already lost the chance to look readers in. (2/5)

The main storyline takes a small break for a month, as writer David Barnett and artist Martin Simmonds deliver to readers the origin of paranormal agent Dorothy Culpepper. It's a great piece of back story, particularly in the striking way Simmonds illustrates the tale - a way that's enhanced by Dee Cunniffe's bold colouring. The first story arc looks set to wrap up next month; hopefully it's just an arc conclusion and not the end for this wonderful series. I haven't heard either way. (4/5)

My opinions on this book have been pretty consistent from one issue to the next. On the plus side, this is beautifully illustrated and coloured. It has an exceptional formal look and a clean aesthetic that makes it very easy on the eye and to follow. It also does a great job of remixing and redeveloping the old Wildstorm characters into more sophisticated and unified ways and unshackles them from their 1990s origins. This issue boasts a hugely impressive action sequence, as well as great dialogue. The big drawback is that it really doesn't seem to work in 20 page increments. In trade paperback The Wild Storm is probably a stunning read, but the serialisation feels arbitrary - not to mention it's sometimes hard to keep track of the cast and the narrative. It's a mixture of very good and the moderately frustrating. (3/5)
Posted by Grant at 7:33 PM