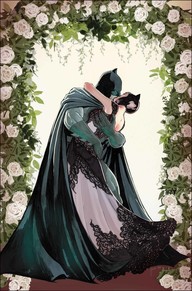 So after much build-up and anticipation, Batman reaches the wedding of Bruce Wayne and Selina Kyle. It is kind of impossible to discuss this issue without spoilers, so if you haven't read Batman #50 but plan to, head beneath the cut and read the reviews of the other books instead. This one's is going to be spoiler city.

When the big day arrives, and with the happy couple choosing to do it with two witnesses and a judge on a Gotham City rooftop, Selina leaves Bruce at the altar. No wedding ensues. Batman and Catwoman are not married. The titular event does not actually occur. Two immediate thoughts come to mind. The first one is that this is not a surprise. The Joker explained last issue how Bruce being happy will destroy Batman, and Selina's best friend Holly explains it again here. Both are correct: with Batman being the brooding monomaniacal creature of the night he's been portrayed as for the past three decades, being happy would absolutely ruin him. Anybody expecting a happy ending simply hasn't been reading Batman comics for a long, long time. The second thought is that whatever went through the minds of comic readers who did expect an actual wedding that led to writer Tom King being sent enough credible death threats that he spent the whole of San Diego Comic Con with an honest-to-god bodyguard is genuinely a worry. It's just a comic book, guys. In a few years DC will launch a line-wide crisis and reboot it all anyway.

You can see what's being attempted here, with full-page narrated splash pages allowing a range of guest artists to contribute work to the celebration, and it is remarkably clever that King uses unreliable narration to flash back to conflicting back stories of years past, but it also makes the book a little bit of a drag. It actually feels a little dull, and it's only the concluding cliffhanger that actually gives the book the spark that it needs. As an issue in its own right, it is a little underwhelming, but it does kick off what look like another great 50 issues of King's run. (3/5)

Under the cut: reviews of The Avengers, Beneath the Dark Crystal, Delta 13, The Immortal Hulk, and Lowlifes.

Loki takes Captain America to the Progenitor - the source of not only all Celestials, but all superheroes. Meanwhile Odin gives She-Hulk and Thor some valuable back story, and Dr Strange and Iron Man try to visit the Eternals. One thing that is very clear about this new volume of The Avengers is how much it's echoing the Marvel Cinematic Universe, with Strange and Stark teaming up, Loki featuring so prominently, and big-scale cosmic action dominating the proceedings. It makes one wonder if She-Hulk and Ghost Rider are going to coming to movie screens sooner rather than later. There's a lot going on here, which works in the book's favour - there's nothing worse than a decompressed storyline with an ensemble cast. That said, while the story is nicely busy the art feels a little too busy in a bad way. With the scale of story, it would be nicer with images that left themselves room to breathe. This book's good, but it's by no means essential reading. (3/5)

Beneath the Dark Crystal #1

Following the much-deserved success in adapting the never-filmed The Power of the Dark Crystal, Archaia are back with an entirely original story following on from it. Some years after their adventure to save the world, Kenshin and Thurma live in their respective kingdoms and resist the forces dragging them to become leaders. While the manner in which their lives will reconnect isn't yet apparent, it is clear that Smith and Huntington have successfully recaptured the tone and style that made Power such a delight. The artwork is clean and beautifully coloured. The script is intriguing enough to hook the reader in without giving away the direction. Lovers of the last series will definitely want to pick this one up as well. (4/5)

A survey ship in the asteroid belt discovers an ancient alien structure on a large, previously unexplored asteroid. Inside they find a comatose alien, and against the first officer's better judgement bring back to their ship to examine in the medical bay. So far, so Alien. Any hopes of a surprise change in direction are dashed when the story continues in similarly broad strokes to Ridley Scott's film. The alien gets loose on the ship. People go out alone and get separated. There's body horror aplenty. While Nat Jones' artwork is great, Steve Niles' script is simply plain lazy, and that makes this a frustrating comic to read. So much wasted potential. (2/5)

If this second issue is indicative of The Immortal Hulk as an ongoing title, Marvel definitely has a creative smash hit on their hands: self-contained one-shot horror stories, with the unlikely through-line of Bruce Banner and the Hulk running across each incident. Al Ewing's script really embraces the sheer horror of what life must be like for Banner, and using that emotional weight to enhance and shape his character.  Joe Bennett's pencils really embrace the old-school sense of pulp horror, but keep a fairly contemporary look at the same time. (4/5)

A weak-willed and emotionally tortured police officer struggles to find the nerve for revenge in a new noir comic miniseries from Brian Buccellato and Alexis Sentanac. This first installment is a fairly unpleasant affair involving sexual assault, and putting the emotional focus on the male protagonist rather than the women who's just been raped. While the artwork is excellent and wonderfully atmospheric, that fairly odious cliche stops this book from achieving its potential. (2/5)