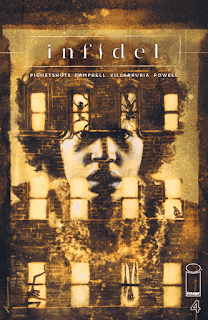 With Aisha still in a coma, Medina makes the decision to return to the apartment block and uncover more information about the supernatural presence that lurks there. Meanwhile, Ethan and Reynolds discover the belongings of alleged occultist Arthur Quinn.

I have highlighted Infidel before, and with the release of its fourth issue it is well worth highlighting again. Pornsak Pichetshote is writing an effective and visceral horror story that drags in bigotry, religious faith, as well as a healthy serve of haunted house archetypes. Horror this good rarely makes it into the comic books.

One of the reasons that the horror works so well is Aaron Campbell's artwork. It is realistic, detailed, and atmospheric. It's all emphasised nicely by Jose Villarrubia's subdued colours.

I know it is a cliche to write 'they don't make them like this any more, but on the whole they really don't. There is an old-school DC Vertigo feel to this series that makes me think back on early issues of The Sandman or Hellblazer. It's great stuff. (4/5)

Under the cut: reviews of Aquaman, Daredevil, and Usagi Yojimbo.

The never-ending fight against Corum Rath continues to never end. What feels like it should have been a climactic one-on-one fight for Atlantis extends into an even-greater battle against the real foe: a supernatural evil buried beneath the city for generations. The art is exceptional, but for me the storyline is beginning to flag. While loving so much of Dan Abnett's epic fantasy playing out here, you can get too much of a good thing. This needs an end and a fresh plot, not just constant extension of the one the series already has. (3/5)

With the Hand taking over New York City, Matt Murdock acting as city mayor while actual mayor Wilson "Kingpin" Fisk lies in hospital riddled with arrows, and an honest-to-goodness demon threatening to obliterate everything, what could possibly make this extended storyline more complicated and over-the-top? Charles Soule's answer: Catholic ninjas. There's a thin line between inventiveness and creative stupidity - so far this story arc is sticking on the right side of the fence. (4/5)

Usagi and Inspector Ishida continue their investigation into the murdered Christians, necessitating a sword fight against a gang of low-rent would-be assassins as well as the ire of Ishida's own superior. By extending this storyline to seven parts, Stan Sakai has exchanged the tight, economic storytelling of his regular Usagi Yojimbo books for something with much more depth, humour, historical context and tone. It's a refreshing change, and remains faultlessly charming. (4/5)
Posted by Grant at 9:57 AM