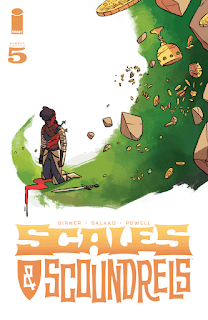 Scales and Scoundrels is fast becoming a real favourite of mine. It boasts a wonderfully simple art style from Galaad with good colours. Its characters are archetypal yet richly developed. It takes the whole Dungeons & Dragons format and tells a fun adventure story out of it.

In this issue the heroes escape from angry fish people to reach the lost treasure of Dalden Laria, deep underground. Dorma gets lost, Koro still struggles with protecting her prince in such a ridiculous and dangerous situation, and Luvander reveals a whole side to her that readers mostly likely did not expect. There's a flashback, moments of quiet, moments of action, and a rollicking cliffhanger ending. This is the stuff for which I read comic books.

Next month sees the release of the first collected edition, alongside issue #6. It's the perfect time to catch up on a really fun fantasy comic. (4/5)

Scales and Scoundrels #5. Written by Sebastian Girner. Art and colours by Galaad.

Kronos, Carla and Grost venture into the lair of the vampire lord Slake in order to save the people of Serechurch - only find one further complication to their quest. Dan Abnett has perfectly captured the tone of Hammer's pulpy cult film, while the art and colours by Tom and Sian Mandrake give everything a nice old-fashioned feel. This has been a tremendous tribute to the original movie, and one of the best tie-in books of the past year. I'd be quite happy to see a second miniseries in due course. (4/5)

Thea and Rollo are brought to a vast storehouse of objects saved from the last apocalypse. For Thea it means rediscovering her lost art, and facing her past. For Rollo and his robotic companion Shiloh it means discovering something much darker, with dreadful implications for everybody. We're now only two issues away from the end of Extremity, and everything is set for a terrifying and destructive finale. This is a remarkable series, combining both good writing and sensational artwork, and strong themes on the price of violence and the futility of revenge. My favourite comic book of 2017 hasn't dropped the ball in the new year. (5/5)

Zedo and Gogi have been separated: for Zedo that means having to prove his worth to one of the underground city's violent gangs, and for Gogi that means discovering an entire white world on the surface, populated by giant monsters and small pockets of human survivors. I noted last month that the first issue of the Valderrama's miniseries was one of the strongest debuts I had ever read. This second issue does not drop the quality for a second. This is gripping, smart, well-developed science fiction, with appealing characters and beautiful artwork. There is a definite anime vibe coming from this book; you can see it working beautifully in animation one day. For now, this is one of the best comic books of the week. Track this one down and check it out. (5/5)

The Queens go looking for Neil who grows mushrooms in his armpits, who has gone missing. All the while the mysterious cult that believes the entire city of Palisades is asleep and dreaming continues to lurk in the background. After last issue I was expecting something a bit more direct and revealing, but Wiebe continues to tease the over-arching story out while engaging in the usual comedic antics. It's broken here and there, particularly in the emotional final scene, but overall this is another enjoyable and nicely illustrated issue of Rat Queens. (4/5)
Posted by Grant at 10:51 AM