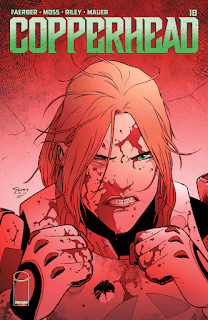 Clara has her showdown with Zeke's criminal father, while Boo and Copperhead's temporary police force race to find her. It's a grand climax to the most personal story arc of Copperhead so far, and one that provides great and dramatic results for readers.

It has been great to see this series right itself after a slightly rocky changeover of artist. For whatever reason, the change coincided with a somewhat uneven storyline. At its conclusion, that storyline has improved immeasurably - particularly thanks to its focus on series protagonist Clara and her previously hinted-at back story. It worked well, not only filling out character but showing off serious consequences to people's actions. It is a tremendously satisfying end, one that also points directly to the next story arc lying in wait.

Drew Moss has really taken this book and transformed the characters into his own. The subtly different aesthetic has really firmed up now, making this really feel like the definitive version of this space western town. (4/5)

Under the cut: reviews of Batwoman and Doctor Strange.

When Julia Pennyworth, Batwoman's technical support, goes missing, it's down to Batwoman to race against time to track her down and rescue her from the villainous Professor Pyg. What looks like a guest issue - new writer, new artist - brings back one of the more distinctive and repellent villains of Grant Morrison's Batman run. He's a distinctive sort of a character, but does not really do a great amount here. Hopefully this is the beginning of a lengthier arc featuring Pyg; this episode suggests more guilt-ridden introspection on Batwoman's part, which is a note the book - and character - have been playing for much too long. (3/5)

Loki was granted the powers of the Sorcerer Supreme, putting Stephen Strange out of both a job and a superpower. Now that it's become clear Loki is plotting to use his new position to rob the entire world of what magic it has left, Stephen has taken the power of the Yggdrasil tree in Asgard to take Loki down. I do love a good superhero smackdown - particularly one as well set up and plotted as this one. It's another hugely fun entry for Cates and Walta's run on the character. Just one warning: if, like me, you don't read a huge amount of Marvel, you may have to brush up on certain guest characters using an online wiki in order to fully comprehend the final reveal. (4/5)
Posted by Grant at 9:30 AM