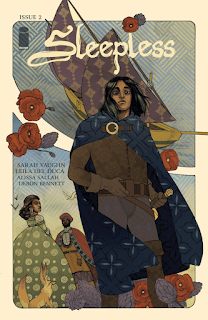 Trapped in a castle and targeted for assassination by unknown forces, Pyppenia must rely on her 'sleepless' bodyguard Cyrenic - unless she can somehow beg the king's permission to leave.

We're two issues into Sleepless and I think I've found another favourite comic. It is a beautifully developed but gently told fantasy, with a rich setting presented via beautiful artwork and engaging characters explored within excellent writing. Writer Sarah Vaughn and artist Leila Del Duca (not to mention editor and colourist Alissa Sallah) are presenting something rather special here.

While the deliberately slower pace does enhance the characters and the intrigue, it is making a little difficult to really ascertain precisely what sort of story Sleepless is going to tell. Personally, with writing and art this enchanting, I'm perfectly happy to wait and see it gradually unfold. (5/5)

Under the cut: reviews of Action Comics, Darth Vader, Detective Comics, and Doctor Who.

Fearing his father somehow survived the destruction of Krypton, Superman travelled back in time to witness its destruction himself - only to find time in flux and Jor-El in league with Zod. Escaping that time with Booster Gold, he now finds himself on 25th century Earth - a time when Booster is a wanted criminal. There's a very wobbly sort of structure to this arc, one that veers pretty close to a string of slightly dull "what if" scenarios and quick but pointless mini-adventures. Booth and Rapmund's art is solid and enjoyable, but I'm not sold on Jurgens' script. Hopefully things will pick up as we near the much-anticipated issue #1000. (3/5)

It is Jedi archivist Jocasta Nu versus Darth Vader inside the abandoned and sealed-off Jedi Temple on Coruscant. Charles Soule's second arc as writer ends with some exceptional action; action that critically takes advantage of the Star Wars toys and settings made available. I am still not quite onboard with Soule's take - I much prefer seeing a Vader who has a few years of experience behind him - but this issue is about as good as he's done so far. Camuncoli and Orlandini's artwork is pretty great, but it's covered up a little too much by David Curiel's slightly murky colouring. (4/5)

Batman had a dream of assembling a unified team of vigilantes who could patrol Gotham City more effectively than as individuals - now that dreams stands in ruins. The villains Anarky and the First Victim have turned Gotham against Batman, and Clayface - the villain Batman thought he could redeem - is rampaging through the city sewers on a direct path for the Belfry. Each issue of this "Fall of the Batmen" arc has successfully upped the ante, and it's now at a spectacular breaking point. It's clear James Tynion has been playing a long game since kicking off this broad arc almost 40 issues ago, and the potential payoff next issue looks set to be huge. (4/5)

The third year of 11th Doctor comics comes to an end as the Doctor and Alice find themselves trapped inside the nightmare reality caused by the Scream and the Sapling. The entire year-long arc simply hasn't worked for me this year. I found the Scream - an insane solitary Silent - an unsatisfactory villain and then some, while the Sapling has felt more tiresome than interesting. Some of the individual issues have been enjoyable, but I'm sad to admit I will be happy to see the end of Year 3 and hope that a prospective Year 4 will mark an improvement. (2/5)
Posted by Grant at 11:02 PM