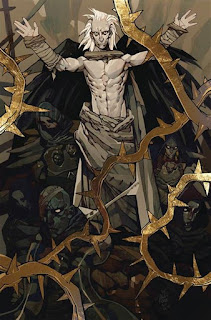 Judas kicked off last month with a pretty daring take on Judas Iscariot, the disciple who famously betrayed Jesus Christ to the Romans - rapidly leading to his crucifixion. It continues with this second issue, that throws any hesitancy aside and dives directly into an issue-long conversation between Judas' now-dead spirit and the Devil himself.

On the one level it is a superbly written and on-the-nose challenge by the Devil towards Judas, God, and Jesus. On the other it feels decidedly less artful this issue: there was a lyrical quality to the first part's obliqueness, whereas here it just does its job in a less artful fashion. Jakub Rebelka's artwork is excellent and distinctive, and really gives everything a very particular tone and aesthetic. It feels ancient and foreboding. There's a slightly sharp, jagged sense to it. It works very well.

This book obviously isn't going to appeal to anyone with an aversion or dislike for Christian mythology, but for those like me who - despite not actually being religious - get a kick out of Biblical stories, it is a very good book. I think I can see where Loveness is going with this, and it promises to be a striking and dramatic work. (4/5)

Under the cut: reviews of Mech Cadet Yu, Port of Earth and She-Hulk.

With their first major conflict with the Sharg behind them, the cadets are now forced to face punishment for disobeying orders: janitor duty. In time of war, however, even cleaning up after a battle brings with it its own risks and dangers. Mech Cadet Yu  was originally devised as a four-issue miniseries, making this the first issue outside of that original art. Unsurprisingly - and appropriately - it is all about follow-up and consequences. The characters are settling in nicely, while Greg Pak shifts the narrative to begin looking at the long game. It's not the most original storytelling, but it's appealing and charming. (3/5)

An alien is on the loose outside of the port quarantine zone, while humanity becomes restless in the face of alien technology and a collapsing global economy. What I really enjoy about Port of Earth is how writer Zack Kaplan is really engaging with the broader economic and cultural effect contact with alien civilizations might have on humanity. So far it's been used for context and back story, but it gives the entire book a much more realistic grounding than it would otherwise have it if just focused on the runaway alien and two security officers trying to track it down. Andrea Mutti's artwork is great, as always, with nicely subtle colours by Vladimir Popov. (4/5)

Jennifer Walters remains a prisoner of the Leader, who has poisoned an ardent Hulk fan to become a giant green monster in their own right. There is something oddly perfunctory about this current storyline. There's a sense of going through the motions here. The Leader has not made for a very engaging villain, there's been very little complexity or nuance, and to be honest no real sense of threat. Lindsay's artwork is competent but not very interesting. I had very high hopes for this series when it launched as Hulk last year. After that first arc, however, it's been a case of diminishing returns. (3/5)
Posted by Grant at 1:05 PM