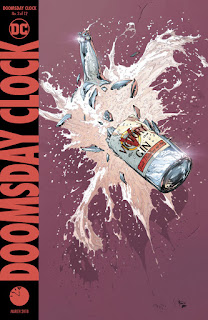 Now that the initial shock has worn off, Doomsday Clock is seeming to be a much less impressive comic book. Basing a storyline around Ozymandias escaping the Watchmen universe to the DC Universe had a lot of merit, and the first two issues appeared to show a very promising and surprisingly respectful use of Alan Moore and Dave Gibbons' characters (asides from the elephant in the room, of course, of using them at all). Now inspired reworking feels like schtick, with the return from the grave of a character that desperately needed to stay dead, and some fairly obvious and rote echoes of the original Watchmen's structure and narrative in this new spin-off.

Gary Frank's artwork is admittedly great, as are Brad Anderson's colours. Stylistically it feels like a fairly impressive act of mimicry, echoing the look and tone of the original book remarkably well. In the end, however, it is just feeling like a mercenary copy. How many months will it take before Doomsday Clock is almost entirely forgotten; a weird footnote in comic book history to sit alongside DC's earlier and unnecessary Before Watchmen miniseries? (3/5)

Under the cut: reviews of Action Comics, Batgirl, Detective Comics, and Gears of War.

This is one of those annoying comic books where the image on the cover spoils the final page cliffhanger. That aside: on Earth Lois heads into a violent African country to rescue her father, while somewhere else in time and space Booster Gold and Superman arrive on a planet where General Zod has taken over and ruled for decades with an iron fist. It's solidly entertaining, but also a little breezy and throwaway: the entire Superman time travel storyline currently running feels remarkable slight. It's old-fashioned and broadly entertaining, but Jurgens could be writing something a lot more interesting. (3/5)

Unnatural snowfall over Burnside and an unexpected team-up with the Penguin makes this first part of "Cold Snap" a pretty enjoyable experience. The regular creative team of writer Hope Larson and penciller Chris Wildgoose has developed a pretty well-honed strength for this kind of upbeat and breezy comic book, one that suits Batgirl tremendously. Despite the strong writing quality of Gail Simone's New 52 run a few years ago, this brighter take is absolutely the way to go with Barbara Gordon. (4/5)

"Fall of the Batmen" ends precisely where you would fear it to, and it's going to be a very interesting set of issues coming up to fully explore the ramifications and fallout from what takes place this issue. It's wall-to-wall high drama in the lead-up, as an out-of-control Clayface threatens the lives of hundreds of protesting Gothamites - and bringing down Batman's carefully developed team program in the process. Solid artwork by Merino, and a stellar script by Tynion, makes this a fantastic climax. (4/5)

This spin-off comic book provides back story to the villain RAAM, which likely won't make a huge amount of sense to anybody not playing the Gears of War videogames. It is reasonably well written and illustrated, but the bottom line is that it's playing to a specific target market. If you aren't already invested in the world of the games, then there's not much here for new readers to latch onto. If you are a Gears of War enthusiast, by all means check it out: it's entertaining stuff. (3/5)
Posted by Grant at 4:10 PM