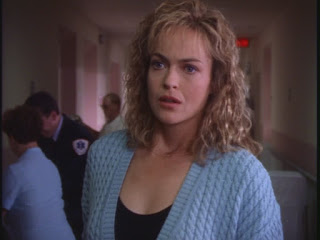 It is 7 November 1992, and time for another episode of Highlander: The Series.

While walking down the street one night, Duncan (Adrian Paul) is the victim of a hit-and-run accident. Rushed to hospital, his immortal healing powers attract the attention of a deranged emergency ward doctor (Joe Pantoliano) - who kidnaps Duncan to undertake experiments on him.

You have to at least admire the consistency of early Highlander episodes. They're packed with silly plots, terrible acting, and often-times pretty cringe-inducing dialogue. This one throws in what is effectively a mad scientist crossed with a serial killer, one who kidnaps patients from his own hospital without people knowing and who operates an entire backyard surgery for human experimentation in his suburban basement. Not that the episode interrogates him at all; he's just the villain of the week.

It's a shame, because in casting the rather talented Joe Pantoliano (The Matrix) as the villainous Dr Wilder, the series has given itself the opportunity to take the character up a notch. That they don't wastes both Pantoliano's time and the audience's time. He's not only a bit silly, he's fundamentally non-threatening. That kills any potential tension stone-dead.

News reporter Randi McFarland (Amanda Wyss) is back. She feels like a very weak cliche, and there doesn't seem to be much long-term potential in a journalist constantly getting involved in Duncan's affairs without ever learning he's an immortal and the biggest story of her career.

It's not a complete loss. For the second week in a row the script actually gives Alexandra Vandernoot something to do as Tessa, and Adrian Paul is settling very comfortably into the title role. He has a great sense of comic timing, and the series is slowly beginning to exploit that. It's not enough to save the episode, but it is a silver lining. Eight episodes into Season 1 and only two have been good. The quality ratio slips to 25 per cent.
Posted by Grant at 12:27 PM