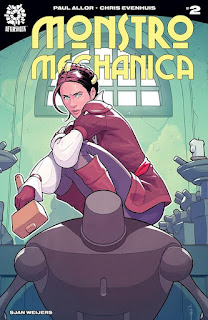 While Leonardo supervises the implementation of his siege engines, Isabel takes his automaton inside Volterra to rescue the city's praetor.

Monstro Mechanica is exactly my kind of comic: a period setting, a blend of real-life history and speculative fiction, and a robot with artificial intelligence. It's got a great sense of setting and tone, and is yet another book in the long and constantly growing list of "comics that, in the mid-90s, would have published by DC Vertigo".

Paul Allor's script is simple but strong, and he has presented a very fresh and more youthful take on some rather over-exposed historical characters like Machiavelli and Leonardo. That he makes his protagonist a spirited and aspiring young woman works very well, and provides a lot of dramatic material as she fights within an overtly patriarchal environment. Chris Evenhuis' artwork is clean, realistic and very sharply inked, and enhanced very well by Sjan Weijers' colours. Weijers uses a very simple palette, without much shading or too many colours, and that gives the book a very distinctive look.

With good writing, good artwork, an evocative setting, and a carefully limited fantastical element, Monstro Mechanica is pretty much my dream book. (5/5)

Wilson Fisk, aka the criminal gang lord Kingpin, has been elected mayor of New York City. One of his first acts was to ask Matt Murdock to join the team as deputy mayor, and - to the surprise of many - Matt has accepted. Now he's working in the lair of his arch-enemy by day, and running around with a reward on his head as Daredevil at night - and things are about to get much worse. Charles Soule is building up a strong storyline as Daredevil approaches its 600th issue, but I'm less convinced by Stefano Landini's artwork. There's something about it that doesn't quite gel with me, but I'm still trying to put of finger onto what it is. The story sustains it, however, so hopefully Landini will settle down over the coming issues. (4/5)

Scott Free heads home to undertake his execution, Barda at his side, but instead of quietly submitting they got on a violent and rebellion rampage. This is a fantastic issue, throwing some proper action in for the first time and balancing comedic and dramatic moments with a remarkable deftness. Mitch Gerads layouts - which are deliberately very restrained - and artwork - which is always interesting to read - really knocks this issue out of the park. There is still a lot going on here that's obfuscated by Tom King's script, deliberately so, and I can't wait to see it all unfold in the coming months. (5/5)

Kamala Khan has retired from her life as Ms Marvel, and no one knows where she is. That's left her high school friends - all without super powers - to try and defend New Jersey from criminal masterminds in her stead. It's testament to how well G. Willow Wilson has developed this book's supporting cast that she can sustain an entire arc without the title character. The humour is there along with the teen drama, and Nico Leon and Ian Herring make it all look simply wonderful. (4/5)

Unemployed and cursed with a nightmare housemate that won't leave, Rocko gets desperate and signs a contract to be a cleaner for the Devil down in "Heck". The pace is great, the art and colours pop, and the humour is wonderful. Ryan Ferrier, Ian McGinty and Fred C. Stresing are nailing the tone and style of the original Rocko's Modern Life cartoon, and what's more they're making a humour comic strong enough that you don't need to know the cartoon to enjoy the book. (4/5)
Posted by Grant at 4:24 PM