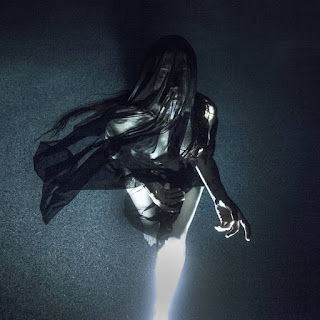 Black Mare is a music project written and performed by Los Angeles resident Sera Timms, who also plays in such bands of Zun and Ides of Gemini. Her latest release is Death Magick Mother, released this past September. I'm not quite sure whether one would describe it as an EP or a full album. It runs for seven songs in total.

The album begins with "Ingress to Form". A simple combination of guitars and percussion runs along with a very rough and simple sound. For a while it seems this garage-style grungy strumming is going to be all there is, but Timms' ethereal vocals kick in almost halfway through and lift the song up to a whole new level.

It is repetitive, but that repetition develops into an almost hypnotic hook. It's music you can feel as much as hear. There's something tremendously effective about it.

Then the second track, "Femme Couverte", begins. There's an immediate deja vu about it. The combination of guitars and percussion. The ethereal vocals. The finer elements are different, but the overall style remains. By the time you hit "Death by Desire", the third track, it becomes apparent that there is not going to be a lot of variation in the album's sound. The heavy, percussive guitar work is carried throughout, as are Timms' ethereal and wailing vocals. This is less of a seven-track album and more of one sprawling, droning single song that runs for about 36 minutes.

The question then becomes whether or not one likes that 36 minute-long song. For me it works remarkably well. There is a power behind Timms' voice, and a strength in the echoing guitars, that gives Death Magick Mother a genuine strength. It is hugely atmospheric, and has a somewhat cumulative effect. Buy in at the early stages and this is one hell of an album. Fail to engage, and you may as well drop out by the second track. What you hear is what you get.

There's a weird Jefferson Airplane vibe running through this album. There are echoes of The Cure in the guitar melodies. It's music clearly inspired by other bands, but Timms gives it enough distinctiveness that it stands on its own two feet as a creative work in its own right. Dark, dreamy, show-gazey: Death Magick Mother is pretty great.
Posted by Grant at 9:05 AM