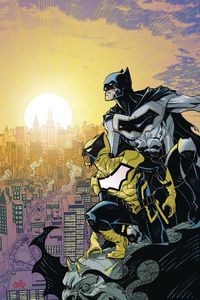 Does Batman have too many supporting characters? This is a question that briefly comes up in the first issue of the new spin-off miniseries Batman and the Signal, suggesting that creator Scott Snyder and writer Tony Patrick already know the answer to their question.

Scott Snyder created Duke Thomas during his New 52 run on Batman, with the character first encountering Batman during the events of "Zero Year". Duke then starred for a while in the underrated and short-lived We Are Robin, before becoming Batman's sidekick-in-training during Snyder's All-Star Batman. Most recently he was seen in the lead-up to Dark Knights: Metal, where he learned he actually had super-powers.

In this three issue series, Duke makes his debut as the Signal. He's the day shift for Batman's war on crime, and he has the power to see patterns of light that help him anticipate the movements of criminals in a fight, and see things that happened before he even entered the room. I like Duke as a character, and the Signal seems as good an identity as any. Cully Hamner's artwork is pretty great. I'm just not sure we need another supporting character helping Batman out. (3/5)

Under the cut: reviews of Batman, Giant Days, Green Arrow, and Spider-Man.

While Bruce Wayne consoles a 12 year-old boy whose parents were murdered, he finds a child with a more than healthy interest in Bruce's own tragedy. Meanwhile, as Batman, Bruce attempts to find the killer. There's an inherent problem with being the writer of Batman. Tom King writes this issue, the 810th so far, and with that many stories behind him it's inevitable he's going to cover old territory. Basically this entire storyline, with minor variations, has been done before. That puts a little dent in King's effort. Understandable, but understandably not as enjoyable as previous issues. (3/5)

Esther and Ed go on a pub crawl together, revisting their respective adolescences as they go. It's a nice exploration of character - particularly two characters who work surprisingly well together - and it rolls along with a typically light, gently humorous tone. Giant Days is such a warm, consistent book that I sometimes wonder if I should stop reviewing it - what else is there to praise? - but I basically bookmark it here, hoping that if you see me praise it enough times you'll give the book a shot. (4/5)

Oliver Queen is in a deep sea suit, sinking to the bottom of the ocean. His traitorous, presumed-dead mother Moira Queen is on her way to the Ninth Circle to repay her debts. Merlyn the archer is on his way to meet her. Shado is heading to the Ninth Circle to replay debts of her own. Black Canary is looking for Oliver, and basically it all pulls together in one room for the start of what looks like the final confrontation of the entire 36-issues-and-counting Ninth Circle saga. It's enjoyable but frustrating, with just a few too many things happening and with Ferreyra's artwork feeling oddly rushed compared to his usual work. Good, but not a good as it should be. (3/5)

Lana's mother, the original Bombshell, is demanding she return to join their life of crime. Miles has something to say about that - but so does the mysterious Iron Spider, whose heist requires both Bombshells to pull off. It's slightly weird coming to this issue after reading Spider-Man II, which pointed Miles towards a new phase in his life without being a Spider-Man. Here he's still Spider-Man, as if Spider-Men II never happened. I know these things happen with multiple titles, but it feels weirdly out of order. The various villains of this new Sinister Six are an entertaining read, however, as is Ganke's burgeoning love life. Part-soap, part-superhero, well illustrated: Spider-Man is ultimately rolling along just fine. (4/5)
Posted by Grant at 4:59 PM