Star Trek: The Next Generation: "Bloodlines" 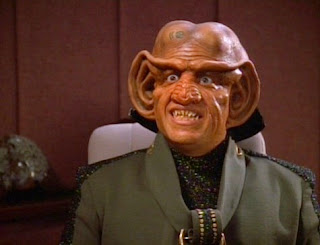 It is 2 May 1994, and time for another episode of Star Trek: The Next Generation.

Captain Picard (Patrick Stewart) is once again hunted down by Daimon Bok (Lee Arenberg), the Ferengi captain whose son Picard killed years ago while captain of the USS Stargazer. This time Bok has targeted Picard's son Jason Vigo (Ken Olandt) for death - a son Picard did not ever know he had.

You can't keep a running theme down, and once again Star Trek: The Next Generation chooses to base an episode around family. This time it's Picard meeting and struggling to reconcile with a previously unknown son - the result of a doomed romance decades into his past. While focusing on a family member again is irritating - this is the ninth time in Season 7 - what really strikes me as bizarre is the return of Bok.

I remember the first time I saw "Bloodlines" I initially did not realise it was a sequel. Bok previously appeared in Season 1's "The Battle", a mere 165 episodes and six-and-a-half years ago. He was not seen any time in between. He wasn't even mentioned. His return here completely lacks any sense of suspense or drama because audiences simply did not care who he was. They could not even secure the original actor, Frank Corsentino, and replaced him with Lee Arenberg. Given the pretty low urgency in bringing the character back at all, it's a wonder the production team didn't simply change their minds and move on.

Ken Olandt gives a likeable performance as Jason, Picard's apparent long-lost son. It is not convincing for a second that he actually is Picard's son, so when the episode attempts a shock reveal that Bok has manipulated Jason's dna to make him appear to be Picard's child the response is less surprise and more a bored nod that one's suspicions were correct. Matters are not helped by Jason being written as a stereotypical loveable rogue. It's a bit of a shame: Olandt and Stewart have pretty decent chemistry together.

There simply isn't enough to this episode to make it worth watching. No one cares about Bok. Even if they did, Arenberg performs him so differently to Corsentino that they may as well be different characters. The episode risks nothing in terms of giving Picard a son. The whole thing is throwaway. It simply is not worth the time. Season 7 is left with 12 good episodes out of 22, and a quality ratio of 55 per cent.
Posted by Grant at 10:32 AM