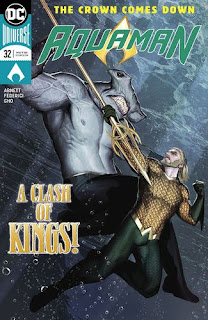 Here's the honest truth: Aquaman is currently one of the finest superhero books on the market, and if you're reading DC and Marvel and not picking it up you are doing yourself an embarrassing disservice.

The first half of its success has been writer Dan Abnett. He writes a long game: setting up a broad range of supporting characters and weaving in all manner of subplots as he goes. The longer it stretches on - and he's been stretching it for more than 40 issues now across two volumes - the more rich and complex the story becomes.

The second half is the recent shift to painted-style artists - first Stepjan Sejic and now Riccardo Federici - that has given this epic story of Arthur's overthrow and slow return back to save Atlantis the appropriate level of gravitas and emotional power. Sunny Gho's rich colours emphasise that power tremendously. There isn't currently a DC superhero book that looks better than this. (5/5)

Under the cut: reviews of Batman, Superman and Super-Sons.

Wonder Woman comes to Gotham City to inform Batman that a pledge they made years ago to relieve a nameless warrior defending a gate from monsters has been called in: they will grab swords and hold back the tide while the 'Gentle Man' rests in Gotham. It is a sharp jump from the last two issues, which formed a much more light-hearted story, but the wonderful interplay between Bruce and Selina remains: she's left caring for the Gentle Man while Bruce and Diana take up swords. I'm not quite sure I like where the story is going by the end, but that's another issue for two weeks' time. Joelle Jones is back with her wonderfully emotive, loose artwork. It's an unexpected style for Batman but it works. (4/5)

Readers who dislike Superman for his classic 'aw shucks' sentimentality will want to walk right past this issue, since it's entirely about Superman taking a group of hospitalised children out for the day, "Make a Wish" style. Is it sentimental? Absolutely, but to the credit of Tomasi and Gleason they fully embrace it - and readers who do the same will have a great time. Is it necessary? Absolutely not. Does it further any of the book's ongoing character arcs? No. It is, however, rather sweet and charming. It's a palette cleanser. (3/5)

"Super Sons of Tomorrow" does not so much end and just stop. Precious little action happens here: the future Tim Drake gets thrown into the time stream, and the rest of the issue focuses on characters talking to one another, cooling down, and generally playing out an overly long epilogue. I am sure future Tim will return, since in the end this entire arc has felt like a set-up for a future event crossover along the lines of Zero Hour. Competently made, an oddly depressing final two pages, but really nothing exceptional. It feels like a real missed opportunity. (2/5)
Posted by Grant at 10:37 PM