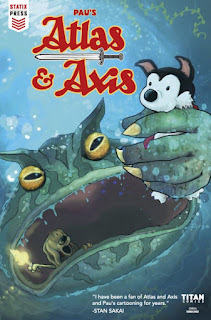 Statix Press and Titan Comics continue making European comic works available to English-speaking readers with Atlas & Axis #1, the first issue of writer/artist Pau's action fantasy starring a pair of anthropomorphic dogs. In a sort of cod early medieval Europe, Atlas and Axis find their village decimated and its women and children kidnapped. They set off to rescue their family and friends, encountering other anthropomorphic animals along the way.

Pau, a Spanish writer and artist, is clearly inspired by the French comedic books of the 1970s and 1980s - Asterix and the like - and certainly works the book in that vein. There's a nice balance of humour, although a fair amount is derived on having the humanoid animals act like their four-legged counterparts.

It's breezy and pleasant, but not a must-read. It is good, however, to see these European works get more exposure to English-speaking audience. There's a whole industry of this stuff that we rarely get to see. (3/5)

Under the cut: reviews of Batgirl and the Birds of Prey, Deadman and The Power of the Dark Crystal.

Batgirl and the Birds of Prey #18

The Birds of Prey head off to Paris in this very enjoyable 'done-in-one' adventure. The actual plot is almost beside the point (the international spy agency Spyral persuades Huntress to go stop a madman from stealing cutting-edge technology). What makes the book sing is, as always, the bright and upbeat manner in which Batgirl, Black Canary and Huntress work together. It is always a delight, particular when so many other books have their superheroes be troubled, gritty and abrasive. (4/5)

Deadman's hunt to solve the mystery his missing brother takes him to his own circus-performer family, where the Spectre launches Deadman into his own father's brain. There important back story is revealed, directing the next stage of his quest. Well, it's another issue of 21st century Neal Adams, which means wonderful old-fashioned but slightly busy artwork, and a storyline that is high on hyperbole but low on sense. To be blunt, this series is straight-up panicky nonsense. At this stage in his career Adams has become an acquired taste: if you can dig the insanity, there's a lot of fun to be had. (3/5)

The Power of the Dark Crystal #10

Archaia's sequel maxi-series to the 1982 movie heads into the home stretch with an issue that is high on drama and immensely effective. For any readers who have seen the film - and I'm going to go out on a limb and suggests that's likely all of them - this issue is enormously resonant and emotional. Much-loved characters seem set to exit the story in a permanent fashion, and a growing sense of hopelessness pervades Kensho and Thurma's quest to save Thurma's underground world from destruction. (4/5)
Posted by Grant at 9:34 AM