Highlander: The Series: "Bad Day in Building A" 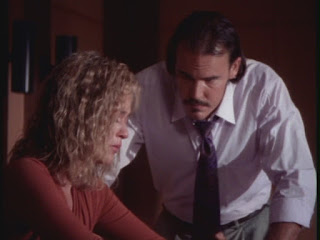 It is 24 October 1992, and time for another episode of Highlander: The Series.

When Tessa (Alexandra Vandernoot) heads into city hall to pay a stack of parking tickets, she and Ritchie (Stan Kirsch) are taken hostage as part of a violent criminal's escape attempt. When Duncan (Adrian Paul) steps in to help, he gets shot for his troubles - but as an immortal he is soon up and running, taking down the hostage-takers one at a time.

Or, in other words, 'Highlander does Die Hard'. "Bad Day in Building A" is terrible; really, truly, and overwhelmingly terrible. It does not actually feel like something written for Highlander; take out one scene of Duncan being 'executed' and it could easily sit comfortably inside of Walker: Texas Ranger or the like. There are no flashbacks - a first for the series so far - and no immortals other than Duncan. It is entirely generic and miserably redundant television.

The episode guest stars Andrew Divoff (Another 48 Hours) as the murderous Slade. To his credit he injects a bit of energy and personality into a terribly pedestrian character. At the same time Adrian Paul works what humour he can into the episode. Poor Alexandra Vandernoot and Stan Kirsch only don't get a lot to do bar sit in a courtroom and make angry comments at their captors.

Partway through the episode goes from derivative to actively annoying by having Duncan stumble upon an abandoned young girl. He spends much of the remaining episode escorting her around, hiding her in cupboards and ventilation ducts so she doesn't see anything when he brutally slabs and slashes all of Slade's henchmen. Highlander's franchise-long penchant for suddenly giving its leads their swords despite visibly not having them moments earlier continues.

The episode does see the return of TV journalist Randi McFarland (Amanda Wyss), last seen chasing a story in "Innocent Man" two weeks earlier. One would hope that sooner or later she will recognise the same man at the site of all of these beheadings and massacres; I actually don't remember much about these Season 1 episodes at all, so we'll just have to wait and see.

Oh this episode is just dull to watch, and easily skipped. Six episodes in, and the quality ratio drops to 33 per cent.
Posted by Grant at 6:35 PM