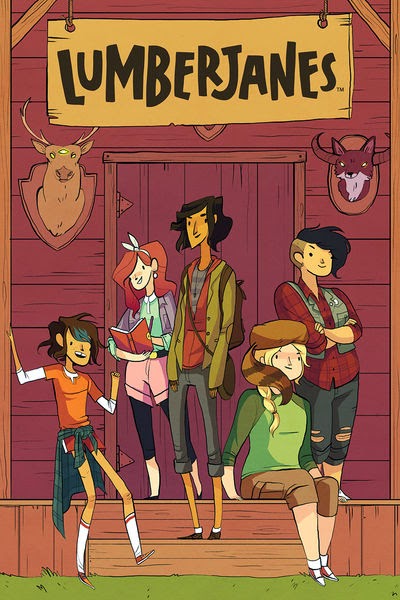 Lumberjanes boasts one of those awesome indie covers that I find difficult to walk past: it's got a sense of energy and whimsy to it that I just love diving into. It's also the sort of thing I track down in collected editions, but in this case I figured I'd take the plunge and support the creative team on a month-by-month basis.

The comic follows five teenage girls at a summer scouting camp who find mysterious monsters in the surrounding woods. It's got the tone down right, but for some reason it doesn't quite gel together as well as it should. The art is great, although with some comparatively large panels it does wind up being a very quick read. There are some nice touches in the comic's back-end. I did really like the cut-out-and-keep CD sleeve for fans wanting to compile their own Lumberjanes mix CD.

This is a good comic, but I want it to be better. I think it has the potential, and certainly I'll be buying the next issue. For now, however, it's not matching the potential of its own cover, and that just left me a little unsatisfied. (3/5)

Gail Simone's off Batgirl for another month, with heir-apparent Margueritte Bennett presenting another story of supernatural monsters for Barbara Gordon to overcome. It's happening so often that even Barbara has noticed; hopefully it's leading somewhere, otherwise it's a sign this book is just getting weirdly repetitive. This is a straightforward but broadly entertaining issue, although it does seem to have been written before DC delayed Forever Evil twice, since Barbara spends much of the issue mourning the apparent death of Dick Grayson (I don't buy it - she might think he's dead, but I will bet all the money in my pockets that he's still alive). (3/5)

Some years ago DC had a massive hit with 52, a year-long weekly series that sold brilliantly and received tremendously (and well-deserved) reviews. Subsequent attempts to recapture that success have failed, with both Countdown to Infinite Crisis and Trinity failed to get the same kind of readership or acclaim. Now they're trying again with Batman Eternal, the first of three weekly comic books coming in 2014. That seems like too many. This is, however, a very strong and action-packed first issue that re-introduces Gotham police detective Jason Bard to the the DC Universe while presenting an inciting incident that will have repercussions over the next 12 months of storylines. It's a financial commitment of more than US$150 to follow this story through to its end next March, but based on this issue it might just be worth it. (4/5)

Warner Bros announced this week that they're going ahead with a movie adaptation of FBP, which must be some kind of vote of confidence in the property. That's probably a little reassuring to creators Oliver and Rodriguez, whose contemporary SF thriller is the lowest-selling of all current Vertigo titles by about 1,000 readers. This is a very enjoyable issue, with our protagonists stuck in a small town where the laws of physics have largely ceased to apply. Robbi Rodriguez's curvy, sort of sketchy art style continues to impress - it's helping to give this book a distinctive identity. (4/5)

Lewis and Clark's first adventure concludes here, with their expedition on the run from a horde of rampaging plant-infected zombie animals. If 'rampaging plant-infected zombie animals' doesn't get you intrigued, I'm not sure you should be reading comic books. This has been an excellent historical sort of horror comic that's established a very distinctive tone and is boosted by sensational artwork by Matthew Roberts. I'm really looking forward to seeing where they go with the next arc, and for those of you wanting to catch up there's a low-priced trade paperback due in May. (4/5)

This issue is better than last issue, but it still suffers from many of the same problems. There's no suspense in whether or not Leia will marry an alien prince, because we know she will not. Luke sulking that Leia's going to marry somebody just feels creepy and wrong, given what we know of future revelations. At least this issue's art seems better, and there's some decent characterisation going on. All in all, however, it's still a book that's losing momentum and energy precisely when it should be arcing up for the rest of year. (3/5)

DC are really having a problem at the moment - well, I think it's a problem - where the covers present scenes that don't occur in the comics. So first up I want to assure you that at no point in this issue does Huntress threaten to shoot Power Girl with a crossbow. This issue follows up from the disastrous Batman/Superman crossover (in which part 4 is released and done, and part 3 doesn't get released for two more weeks) with our leads re-committing themselves to returning to their own Earth. I guess they'll succeed when sales drop too low and the characters need to be folded into the better selling Earth 2. (2/5)