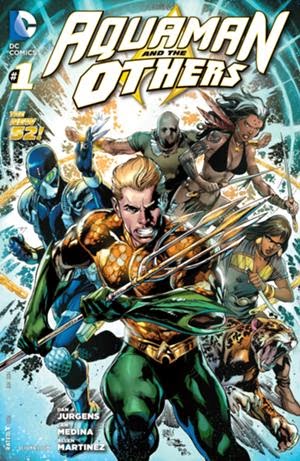 DC have a genuinely impressive ability to launch comics with very little chance of prolonged success while leaving deat-cert hits languishing on the shelf. Example: Tim Drake's Robin remains one of the company's most beloved characters, and he still doesn't have his own title in the New 52. With the cancellation of Teen Titans he doesn't even get to share a book. Conversely we're now getting a team book featuring the Others, a group of grumpy characters who don't even seem to like each other who are united by their use of Altantean artefacts to get their powers.

Aquaman is currently selling around 35,000 copies per month. An Aquaman spin-off is likely to sell quite a bit less than that. If we look at the February 2014 sales figures, we can see that Green Lantern Corps sells about 60% the number of copies of lead title Green Lantern. This would put the sales of Aquaman and the Others at around 21,000. If that's the book's starting point, I give it eight issues before DC cut their losses and collect what's there as a trade paperback (or maybe not even that - Green Team: Teen Trillionaires launched with 27,000 units in the market, and final sales were so low it's not even getting a trade collection - the first New 52 monthly not to do so).

So to be blunt: this book isn't going to be around for very long. On the one hand that's a shame, because it actually features new characters - something DC's been fairly slack about generating in recent years. On the other hand, it's a very workmanlike and ordinary comic. There's nothing here that's particularly bad, but there's also nothing that's exceptionally memorable either. Dan Jurgens writes the sort of script he always writes, by which I mean it's solidly average, and the art by Lan Madina and Allen Martinez is competent without being notable. So altogether the book is good, but it's almost certainly not good enough. (2/5)

There are things to like in this issue of Action Comics, and there are things to dislike. It does provide a neat little epilogue to the latest storyline, with Superman finally meeting the mastermind behind the well-funded military operation that's been fighting him. It's also great that Pak name-checks a whole bunch of stuff from DC New 52 titles in recent months and years: one of the things the New 52 has lacked is that big sense of an interconnected DC Universe, and stuff like this goes a long way to help bring that back. On the other hand, I'm not a big fan of multi-title crossovers when I'm only buying one of the four or five titles in the crossover. They're doing a big Superman vs. Doomsday rematch for the next few months and I'm not inclined to buy all those extra books (Superman, Superman/Wonder Woman, Batman/Superman) on DC's say-so. (3/5)

Accepting the current Batwing storyline means accepting that underneath Gotham City is a massive secret civilization so isolated from the world above that they've developed their own manner of speaking English, and about which Batman himself appears utterly ignorant. Accept that, and Batwing #30 is a passable but ordinary superhero comic. The problem is that I can't accept that: it's utterly ridiculous that something this massive could sit under the nose of the DC Universe's greatest detective and he wouldn't know a thing about it. This issue also features a bizarrely unrelated cover, given that Batwing spends the entire issue underground. (2/5)

Apart from the cliffhanger ending, which I assume is only comprehensible if you're already very familiar with Black Widow's back story (it was nonsense to me), this is a great action story. It's also a great espionage adventure, with more than a few surprises and twists crammed into its 20-odd pages. The real star here is Phil Noto, who gives the book a brilliant European flavour that really suits the glamorous-yet-grounded world of Black Widow when she's not off fighting with the Avengers. (4/5)

The hit team from the New 52 Flash finally make the jump over to Detective Comics, and I couldn't be happier. The beautiful aesthetic and panel layouts that made The Flash so enjoyable continue here, with Buccellato using a more muted, grimmer palette when colouring Manapul's artwork. They tell an intriguing story here as well, drawing in motorcycle gangs, a giant squid, a new project for Bruce Wayne and some very well placed moments of character for a Batman still mourning the death of his son. It's all wrapped up in a beautiful cover with a great new logo as well. I'm happy. (4/5)

There are some nicely intriguing plot developments this month, with the FBI arriving in town and a tunnel getting secretly built - presumably to evade the quarantine zone. This is the comic I read that feels the most like a TV series; in fact, I honestly think it might make for a stronger TV show that it does a comic. It has a relatively grounded, realistic vibe that could be transferred to a US cable network so easily. As for the comic, it continues to boast strong characters, engaging storylines, good dialogue and brilliant artwork. What's not to love? (4/5)

First of all, that's a great cover. Regardless of whatever goes on inside, She-Hulk is knocking it out of the park with Kevin Wada's stunning and painterly cover art. On the inside, however, I'm beginning to feel very slightly ambivalent. I adored the first and second issue, but for some reason this third issue (in which Jennifer must lodge an asylum application for Victor von Doom's spoilt son) falls a little flat for me. It feels artificially forced where the first two issues felt funny and whimsical. This issue reads like hipster bait. Part of the problem is the plot: things have become a bit too over-the-top and ridiculous a bit too fast. It's not a bad comic, but for whatever reason it failed to work as well this time around. (2/5)

After almost three years of confused storytelling, odd soft reboots and utterly tedious character adjustments, Stormwatch finally limps offstage. It's a comic I stopped reading five months ago because Jim Starlin's re-imagining had been so utterly, irredeemable dire that I could bring myself to give him any more of my money. Oddly, this final issue completely overthrows every bad thing Starlin did and return the team to their initial New 52 status quo. Gates and Roberts present a genuinely entertaining, fast-paced one-shot story that's brilliant because it's a delight to read but infuriating because DC should have been publishing this book the whole time. As a send-off, it's marvellous: fixing the problems that dogged the second half of the book's run, and gently returning the characters to the shelf for the next DC title or event to dust them off and visit them again. (4/5)

Jeff Lemire's strange, dreamlike science fiction epic comes to a close with an ending that's wonderfully ambiguous, romantic and dramatic. It's been uniformly excellent, combining the best of Lemire's imaginative writing with his distinctive water-coloured artwork. In many ways this is the least ambitious issue of the eight, but that's because it all has to be tied up and concluded, and most of the issue is dedicated to wrapping up the future storyline in a satisfying fashion. The end is still, however, a wonderful mystery. Such an elegant, intelligent comic. (5/5)

If you add up all of the issues of the three volumes of Ultimate Spider-Man and All-New Ultimate Spider-Man, as well as some (but oddly not all) of the miniseries, you get 199 issues, so to celebrate (read, cash-in) on that tremendous achievement Marvel is publishing this extra-length, extra-cost 200th issue. It's the second anniversary of Peter Parker's death, and his friends and family assemble to remember him, and indulge in a multi-artist festival of nostalgia. In many ways this book is review-proof. It is what it is: nostalgia wrapped up with a string of splash pages. The characterisation is fine, with some very nice moments, but whether or not you find this issue a necessary purchase hinges entirely on how nostalgic you are about 200 issues of Ultimate Spider-Man. (3/5)