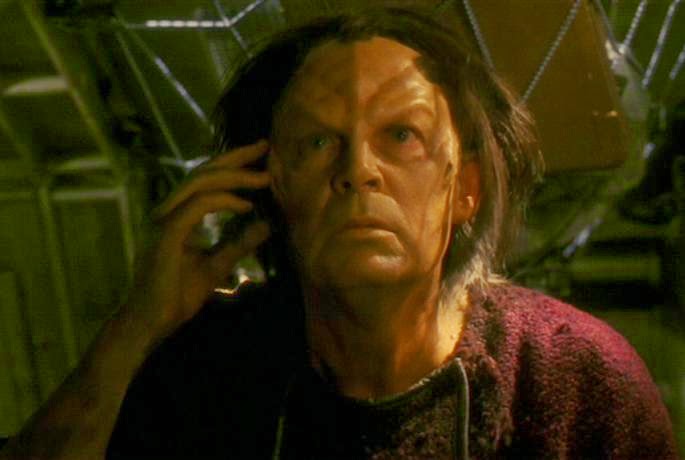 Three years after the destruction of the Earth, Degra - the designer of the Xindi superweapon - wakes on a battered shuttlecraft. His companion, former Enterprise captain Jonathan Archer, tells him that they've just escaped a Reptilian Xindi prison colony, and that Degra is suffering amnesia from the truth serums the Reptiles fed him. Together they go on the run to find Degra's allies and escape the Reptile menace.

Except, of course, it's all a ruse. Thankfully the episode doesn't stretch the lie out further than it has to: we only had a time-travelling 'Earth was destroyed' episode this season, and it would be ridiculous to have two in the one year. Instead Degra has been captured from the superweapon testing site and is being strung along in the hope that he can give Archer the location of the superweapon itself.

It is such a relief to hit a genuinely great episode of Enterprise again. We're back into the season-long story arc, and this time it feels like we're back in it for good. This is a tightly plotted, well thought-out episode that really gives Scott Bakula a chance to shine. The episode is mostly a two-hander between Bakula and guest star Randy Oglesby (Degra), and they play the ruse out very well. Archer is believable, and Degra is convincingly suspicious.

The episode also does a good job of surprising the viewer a little. Just when you think the ruse is over, they manage to take it up another notch. I'm not saying it's Hitchcock, but it is refreshing to have an episode that twists and turns just a little bit. In parts it actually feels less like Star Trek and more like its former Desilu production mate Mission: Impossible, and that's no bad thing. After the last few episodes it's refreshing to have a change. All the series has to do now is keep the momentum going: they have the location of the weapon, and they're on their way.