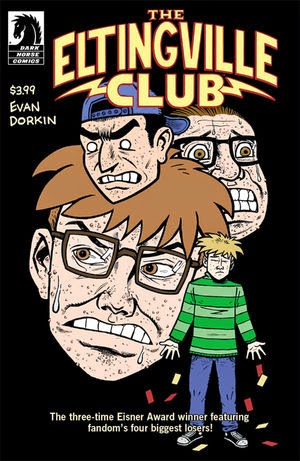 Evan Dorkin is one of my favourite comic book writer/artists. His comedic works are second-to-none, and I'm a proud owner of his collected works from Dork and Milk & Cheese. Eltingville Club is his scabby, relatively unpleasant story about a group of acne-ridden, selfish, horribly cringe-worthy teenage comic book nerds. They've had a string of strips included in the likes of Dork for some 20-odd years, and even starred in their own unsuccessful TV pilot, but now Dorkin has extended their misadventures into a two-issue miniseries in their own right.

It is absolutely cruel, gut-bustingly funny stuff, with no holds barred in depicting the worst possible kind of comic book shop with the worst possible kind of manager. The thing is, I've been to comic shops like this, and while Dorkin may be slicing into the subculture with a knife, it's a remarkably well-aimed and razor-sharp knife. As is generally the rule with comedy, this is not going to be for all readers, but if you're sick of the way Big Bang Theory softballs its criticism of bottom-of-the-barrel geekdom then this is probably right up your alley.

What's particularly impressive is how Dorkin manages to dig into all of the nasty satire and deliver a first-issue ending that's actually rather heartfelt and sad. You may hate these characters, but you identify with them too - or at least I did. Other readers may be too busy laughing at their expense. (5/5)

Well this was abrupt. We ended last issue with Jonah Hex and girlfriend Gina Green back in the 19th century, with Gina gut-shot during the climax. This issue begins with Hex burying her dead body, thus removing any trace of his lengthy and ill-advised sojourn into the modern-day DC Universe. It's as if Gray and Palmiotti finished their time travel experiment, wrote the whole thing off as an aberration and reset the entire book back to hard-boiled western adventure. I confidently expect Hex to get his hideous facial scar back by July. This isn't a bad issue, but the ill taste of recent months continues to linger. (3/5)

This issue it's Aquaman versus Hercules, in what seems to be a growing trend among DC's titles to feature Wonder Woman. Since the New 52 launched she's been quite tightly confined inside Brian Azzarello and Cliff Chiang's Wonder Woman comic, but with that epic coming to a close within the next six months it seems DC is preparing Diana for a much broader role within the DCU. It's a clever move, and it's refreshing to see her in more of a super-heroic capacity. This is a good comic: there's a knock-down superhero fight in the foreground, while continuing story threads develop in the background. (4/5)

I am really impressed with this weekly comic so far: the rapid schedule is giving the story a momentum you don't normally see. For fans of Stephanie Brown this issue is a must-read, since her new origin story as the Spoiler is kicking off in a major fashion. For fans of Gotham Central there's a lot of police activity going on here, including a new police commissioner who's going to make things interesting. What I like most of all with this book is that they're not writing a slow story: things have moved remarkably fast in these first three issues, and if they keep this pace up then Batman Eternal is set to be an absolute epic. (5/5)

Another predictably strong issue of Daredevil, with Matt Murdock adapting to his new home of San Francisco, meeting new associates and knocking heads with a belligerent low-level vigilante who doesn't appreciate him on his turf. What I really like about this book is how effortlessly Waid blends lighthearted action and dialogue with some comparatively dark elements: not the least of which is the continuing mystery over what happened to Foggy Nelson. We knew he had cancer. We knew he had apparently died between volumes (I still don't buy that, by the way). Now we learn... well, best you read the comic for yourself. Great Samnee/Rodriguez cover as well. (5/5)

Matteo Scalera's artwork has impressed me so much at this stage that his name on the front of comic book is an almost guaranteed purchase. He has such a flowing style that's rich with energy and movement, and he's helped to make Dead Body Road one of the best comic book miniseries of the year. Justin Jordan's pulpy, rough characters and dialogue suits the art perfectly, and with one issue to go this is building to a bloody, violent climax. This is proper crime fiction in comic book form: forget all of the pompous rubbish like Sin City and get onto the real thing. (5/5)

It's a new beginning for The Flash with a fresh pair of writers (Van Jensen and Robert Venditti), a fresh pair of artists (Brett Booth and Norm Rapmund), and a new time-travelling storyline that looks set to introduce a new future Flash alongside Barry Allen. It's a very strong and intriguing opening, so if you're hankering for some Flash action this is a definitely jumping-on point. Of course there's a weird problem with this book: it focuses quite a lot on Central City's recovery from the events of Forever Evil #7 - which isn't getting published for another month. It's not as if anything is spoiled per se, but it's still rather sloppy storytelling to get an epilogue five weeks before the climax. (4/5)

This space station police procedural continues to knock it out of the park. It blends its two genres effortlessly, telling a solid detective story that incorporates science fiction concepts and ideas whenever its appropriate, without either genre forcing itself onto the other. I'm warming more and more to the characters as I go as well: this is a really solid book that's going to sing when the whole arc gets collected together in a few months. Hugo nominators looking to read quality SF for next year's ballot should track this book down. (5/5)

With Oppenheimer dead, Albert and Albrecht Einstein sit down for a conversation. Things get very weird here. Parallel universes appear to be involved. It features flashbacks to Einstein as a sword-wielding scientist barbarian. The writing continues to be enormously inventive. Pitarra's artwork continues to be distinctive and engaging. Certainly after a few wobbly issues things seem to be back on track with this book, which now has a firm direction for the future. I'm rather excited to see where things go from here, With Werner von Braun and Yuri Gargarin heading off to find Laika the dog. (4/5)

I had been wondering when the book would follow up on Mary, who departed from the Kapital under less than ideal circumstances. Now Brian Wood picks up her story on a convoy carrying priceless gigalitres of fresh water across the length of Northern Africa. It's a very strong start to a new three-issue arc, with a very positive focus on capable, determined women in Africa. This feels like a really good stepping-on point if you're keen to try this book out. You don't really need to know the backstory to get a full experience from this issue. Guest artist Danijel Zezelj does some nice work with art that's more gestural than I'm used to, but works incredibly well. (5/5)

This is a really solid issue, with Ania Solo hiding out on a planet where it rains glass while her companions fruitlessly continue their search for her. There's plenty of action here which helps keep the momentum going: I've found this series to waver quite a bit in recent months partially because not a lot seemed to be happening each month. Hopefully this newfound pace will continue until the end of the series. (3/5)

Winner of the Week: I can't think of the last time I read six five-star comics in a single week. There has to be a winner, however, so I'm calling it for Eltingville Club.
Loser of the Week: No real loser this week either, although All-Star Western was the closest to being mediocre.
Posted by Grant at 9:35 PM