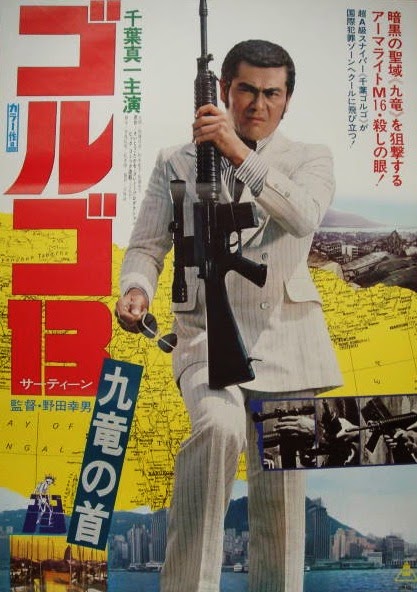 Takao Saito’s Golgo 13 is one of Japan’s longest-running manga, having run pretty much continually since January 1969 and selling more than 200 million books in the process. It’s been adapted several times, often as an anime but also two times as a live-action thriller.

Golgo 13: Assignment Kowloon, produced in 1977, is the second of those two movie adaptations. As a result of its age, its genre and the style of filmmaking at the time, Assignment Kowloon is often a film that you watch for its kitsch value. People have kung fu fights in which their bodies visibly fail to connect, and every punch sounds like the same inaccurate foley effect. Weirdly everybody – including those actually speaking Japanese – seem to be dubbed. The camera zooms where you’d expect it to cut to a close-up, or simply physically track in. That in mind, it still manages to surprise: now and again moments stand out and surpass the overall ‘kung fu flick’ vibe of the film as a whole.

The film does a good job of jumping between the two leads: obviously this is Golgo’s film, and we therefore are encouraged to root for him to complete the assassination, but we never lose sight of Detective Smith’s mission either, and while one seems destined to failure we nonetheless don’t begrudge following the character’s journey.

Production values are, by today’s standards, fairly low, but fans already versed in 1970s Asian cinema will likely find the film quite well made. Like all films of the period and style, it has a scrappy quality to it – low on fine technique but high in energy, dedication and heart.

This review was originally published on the Eiga: Asian Cinema website.
Posted by Grant at 10:09 PM