Star Trek: The Next Generation: "Where Silence Has Lease" 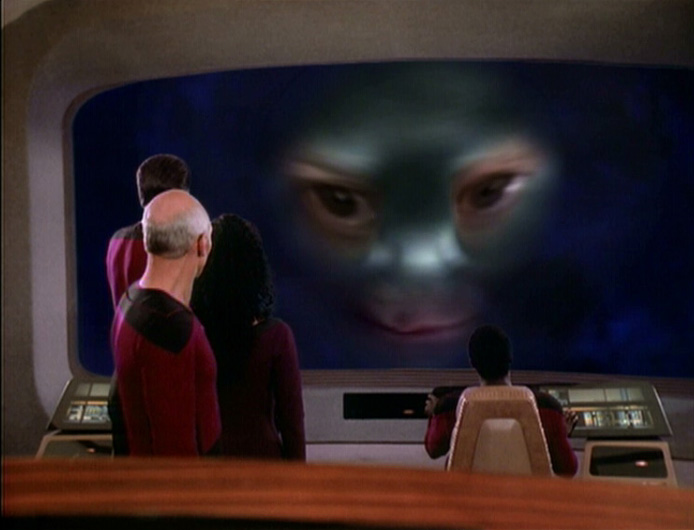 In "Where Silence Has Lease", the Enterprise encounters a strange void in space unlike anything anyone has encountered before. Which, rather perversely, makes it exactly like everything everyone has ever encountered before. I'm not one hundred per cent certain, but I'm reasonably sure that there's never been an episode of Star Trek where someone - Spock, Data, whoever - has conducted a scan, and confidently declared that the phenomena in front of the Enterprise is identical to something in the ship's records.

Once trapped inside the void, the Enterprise is at the mercy of the mysterious alien presence called Nagilum. It threatens to kill half of the crew. Riker and Worf get trapped in an Escher-like mass of duplicate starship bridges. Illusory starships turn up and promptly vanish. By the episode's climax, Picard realises he may have to destroy the entire ship and everybody on it just to defeat Nagilum.

It's much better material than "The Child", but it's still pretty weak stuff. Characters act in rather irrational ways. Both Worf and Riker fall into a terrible panic in separate scenes, which seems to chafe against how they were portrayed in Season 1. Much of the episode feels like padding as well. Once you strip back the unnecessary bits, there isn't enough to fill 15 minutes. Sadly it runs for about 40.

The episode does mark the debut of director Winrich Kolbe, who will be sticking around the Star Trek universe for quite a while and directing some of the franchise's key episodes. He certainly had a challenge directing this episode, since the entire story takes place on the Enterprise and most of that was set on the bridge. The static, bottle-show nature of the episode is actually one of the things that makes it a bit of a chore to watch.

Miles O'Brien is back at the transporter controls for the second episode in a row (his fourth overall), although Riker refers to him as 'lieutenant', something that the series will ignore in the future. Actually O'Brien's rank is one of those bizarre inconsistencies of The Next Generation, sort of like their conveyor belt of chief engineers back in Season 1. He's an ensign in "Encounter at Farpoint", but he's a lieutenant here. Dialogue in "The Emissary" indicates he's a lower rank than Worf, who's a lieutenant junior grade at that point, so this logically means that somewhere in the middle of Season 2 he gets demoted back to ensign. By Season 4's "Family" he's described as a chief petty officer, and Deep Space Nine makes it clear he was never an officer at all. You'd think that would be the end of it, but he subsequently cameos in the Next Generation finale "All Good Things..." and is visibly an ensign once again.

Enough of that: "Where Silence Has Lease" is a pretty tedious episode, so it's getting the thumbs down. That leaves Season 2 at zero per cent for the second week in a row.
Posted by Grant at 9:39 AM