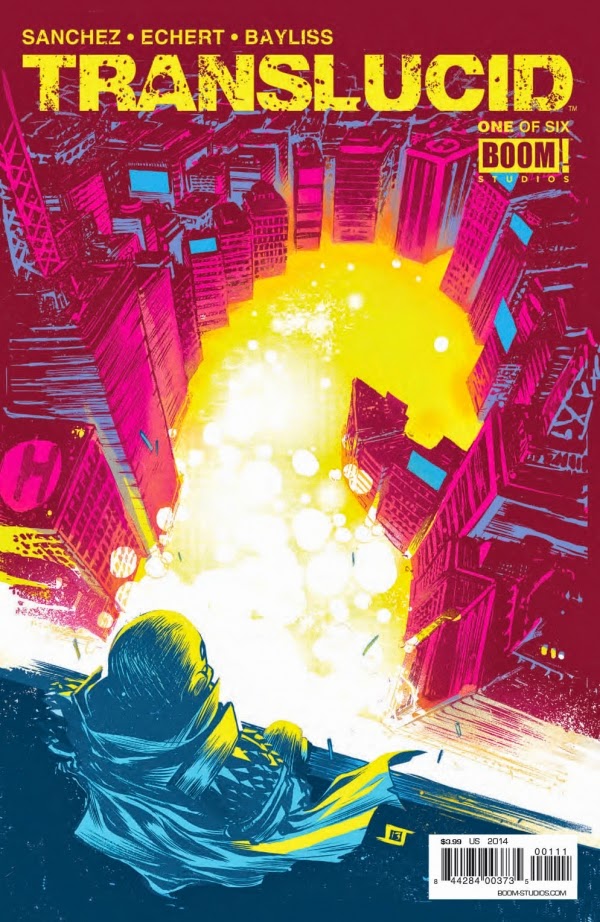 Translucid is a new six-part miniseries from Boom Studios. It follows a former supervillain, recently released from prison, and their encounter with their old sparring partner and local superhero. In many ways it reminded me of Bedlam, with its returning-from-obscurity villain and pre-established superhero universe, but the story it's telling here feels much more straightforward.

It's promising stuff, with Sanchez and Echert writing an intriguing opening chapter that promises a gripping story down the line. That said, it doesn't feel entirely perfect. In some moments stuff with seems like it should be archetypal comes across as stereotypical instead. Daniel Bayliss' artwork is superb, as is the vivid colouring - check out the eye-catching cover to the left.

As with Lumberjanes last week, I'm hooked tightly enough to keep reading. This is a promising start, and with luck it'll wind up an excellent miniseries. (3/5)

The final act of Snyder, Capullo and Miki's "Zero Hour" kicks off in a surprising fashion, tying back to the very beginning of the series and presenting a Gotham City we really haven't seen before. While there are echoes of "No Man's Hand" and The Dark Knight Rises, they are very much charting their own course here. The scripting and art is, as always, sensational, and things are really building towards a knockout climax. (5/5)

Batman's pursuit of Ra's al Ghul (and Damian's body) takes him to Paradise Island, and an encounter with Wonder Woman and the recently revived Amazons. It's great to see Batman crossover so smoothly with Wonder Woman, in an issue that takes last month's Wonder Woman plot developments on board and delivers an enjoyable adventure at the same time. This isn't quite as effective as Bats' team-up with Aquaman in #29, but it's still mightily fun stuff. And next month he's face-to-face with Frankenstein again. (3/5)

This is a fantastic follow-up to last week's debut issue. The plot thickens and develops, more characters are introduced, and a surprising old villain makes his New 52 debut (at least I'm pretty sure it's his debut). With a weekly comic playing such a long game - this is essentially going to be a 52 part serial - there's a lot of room to introduce an expansive cast, and so far it's not disappointing. I was surprised and delighted to see the Spectre turning up, for example. If the momentum keeps going like this week in, week out, then Batman Eternal is going to rapidly become the DC Universe's must-read comic book. (5/5)

This continues trucking along, with Batwoman fighting her way out of Arkham Asylum on the hunt for master thief the Wolf Spider. It's serviceable, readable, broadly enjoyable, but there's a growing sense that this book is being produced by-the-numbers when it used to be something really inventive and bold. I want DC to push this book somewhere exciting again, but I suspect it's going to sit here - safe but average - until sales decline so far it gets cancelled. (3/5)

This is a really amiable book: likeable protagonist, a lightness of touch, teenage angst, superheroics - all blended together in a very satisfying manner. Wilson's writing shows exceptional characterisation: we're only three issues in and I've already got a firm handle on Kamala Khan as well as her posse of high school friends. Adrian Alphona's artwork is distinctive and appealing. I really hope this book gets enough readers for a decent-length run: it deserves it. (4/5)

A prank of Donatello's goes out of control, sending Metalhead on a violent rampage through New York City. This is unassuming, breezy all-ages fun, and to be honest it's kind of sad that when I want to read a straight-forward action-adventure comic for a general audience I'm having to abandon DC and Marvel and go for a TV cartoon tie-in. Is this the best comic on the market? Not by a long shot. It is consistently enjoyable and entertaining? Absolutely. Some of the "big two" titles could learn a lot from this book. Charisma, humour, and done-in-one stories for everyone. (3/5)

This continues to be a story arc where the main present-day portion is entertaining but unexceptional, while the far future side-story - in which a white-haired, grizzled Thor has a fistfight with Galactus - is one of the best things Marvel is producing right now. It's gut-bustingly funny, and ridiculously epic. Esad Ribic's artwork is sensational, while Jason Aaron's script is ambitious and funny. I just wish I could feel more engaged by the present day Thor vs. Roxxon Corp part. (4/5)

Every month I think 'wow, this book is building to a hell of a climax', and every subsequent month the climax doesn't come. It's putting an awful lot of pressure on Azzarello to deliver: this is a 30-issue epic and counting, and I don't think the end is coming any time in the next two or three months. The final two pages are a hell of a kicker, and it's great to see the Amazons of Paradise Island back: people who abandoned the comic early on when they were all turned to stone might want to revisit it now. (4/5)