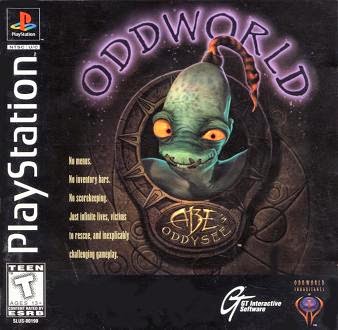 Abe is a slave working in an alien meat factory. When he learns that he and his fellow slaves are to be murdered and processed as the latest foodstuff, he breaks free from captivity and goes about rescuing all of his fellow slaves. He has the ability, via chanting, to possess the enemy Sligs and send them to their deaths. He can also communicate with his fellow slaves, using a combination of gestures, faceslaps and farts to get them to follow and cooperate with him.

Any game where there's a specific control to make your character break wind is going to get my attention. Oddworld: Abe's Oddysee was a rather peculiar hit back in 1997. At a time when most hit videogames were presenting faux 3D graphics, awash with polygons, Oddworld was a 2D platform game. It wasn't even a scrolling platformer: you controlled the protagonist Abe from screen to screen. It felt remarkably old-fashioned. It looked great. It played very addictively.

The game boasts great production design and visuals. By not concentrating on 3D, it's as if the game had extra time to concentrate on looking as good as it possibly could. Certainly it's an approach that delivered great creative dividends. It's playable, addictive, funny and memorable. There were a few other 2D single-screen platformers on the PSX (Heart of Darkness comes to mind), but this was inarguably the best of them.

Of course it's not a faultless game: a steep learning curve combined with a save mechanism that forces the player to reach occasional check points can make for a sometimes frustrating experience.

There was an initial plan to make five games in the series, but ultimately only two direct sequels were produced. Abe's Exxodus was released for the PSX, and Munch's Oddysee was a launch title for Microsoft's Xbox.
Posted by Grant at 8:50 PM