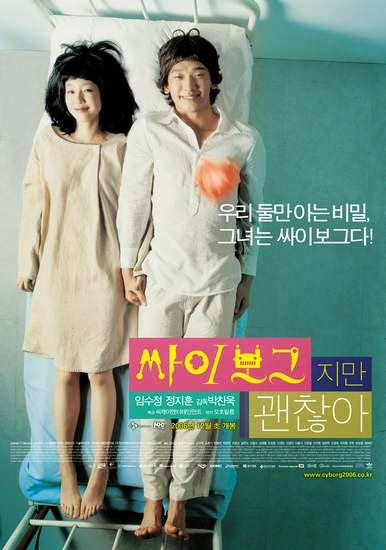 Park Chan-wook remains a critical darling with international audiences, many of whom have experienced South Korean cinema either wholly or partially through his works. His third film, Joint Security Area, was one of the first films of the South Korean new wave to be widely seen outside of its home country. Further hits such as Sympathy for Mr Vengeance, Oldboy, Sympathy for Lady Vengeance and Thirst have cemented Park’s position as the pre-eminent director of Korean film.

Wedged in the middle of this impressive resume is Park’s surreal 2006 comedy I’m a Cyborg, But That’s OK. It was produced between Sympathy for Lady Vengeance and Thirst – both of those films gained a fairly wide international release. I’m a Cyborg mysteriously did not. It made me keen to track the film down and have a look.

Young-goon (Im Su-jeong) is a young woman who believes that she is a cyborg. After an attempt to ‘recharge’ that involves cutting her wrist, inserting some wires into her arm and electrocuting herself, she is committed to a psychiatric hospital for treatment. There she meets a succession of odd and delusional patients, and enters into a strange romance with Il-sun (Rain) – an anti-social kleptomaniac with a penchant for wearing hand-made rabbit masks.

It is an odd film, and to be honest a fairly difficult one to sit through. It suffers badly from problems with tone and content, and while it is littered with visually interesting scenes and moments it always falls back to fairly long periods of being relatively uninteresting or unenjoyable.

One of its biggest problems is the way in which it represents the mentally and emotionally unwell. This is not a subtle film, and while the lack of subtlety leads to some delightful scenes of visual whimsy and fantasy it also leads to a fairly poor depiction of mental illness. Most of the characters do not exist to gather our understanding or sympathy – their illness exists for comedy value. At no point does this seem exceptionally cruel, but it is nonetheless making light of something that’s quite difficult to make light of sensitively.

Park’s films often tread the tightrope of balancing deadly serious or confronting elements with moments of laugh-out-loud comedy and unexpected humour. Oldboy is a near-unparalleled achievement in that respect. I’m a Cyborg, on the other hand, feels a bit like what happens if you slip off that tightrope – you wind up with a movie that doesn’t seem to quite know what it wants to be. The actors do their best with what they are given, and certainly both Im and Rain are highly enjoyable to watch. It is a pity they weren’t given better material to work with. There is visual inventiveness here, and some delightful moments. There just simply aren’t enough of them.

I wondered why this film had never received a wide release outside of Asia. Having sat through it, I think I understand why. This is one for the die-hard South Korean movie fan or the Park Chan-wook completist only.
Posted by Grant at 9:39 PM