Star Trek: The Next Generation: "Heart of Glory" 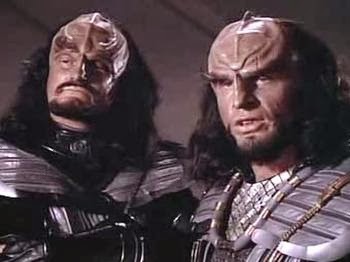 The Enterprise enters the Neutral Zone to rescue a Talarian freighter, only to discover the only survivors are three Klingon warriors. When a Klingon battle cruiser arrives to arrest and capture the three warriors, Worf's allegiances are sorely tested when he is invited to join them.

"Heart of Glory" finally takes Lieutenant Worf out of the background and into the spotlight. With hindsight it's almost impossible to imagine him as a smallish supporting character: after all, between seven seasons of The Next Generation, four feature films and four seasons of Deep Space Nine he's pretty much the longest-running character Star Trek has ever had. Back here in Season 1, however, he's barely had a line of dialogue. The character was a comparatively last-minute addition to the Next Generation cast, with Gene Roddenberry coming up with the admittedly pretty clever idea that a Klingon tactical officer on the Enterprise bridge was a pretty immediate signal that times had changed in the United Federation of Planets. Putting him in the series was one thing, of course. What, then, were the writers supposed to do with him?

I actually have no idea what the original intention for Worf was, but this episode sets him out as the only Klingon in Starfleet, adopted as a child by human parents and raised on a human colony. This is a marvellous adjustment to the character, because it immediately puts him at odds with the Klingons he meets here. It gives him an internal conflict as well as an external one, and the franchise will play around with this for years to come.

In terms of this episode, it's broadly very enjoyable. It takes a bizarrely long time to get going, as Data and Geordi test a broadcast attachment to Geordi's visor. It is kind of neat to finally see what Geordi sees, however it's one of those gadgets that gets used once and is never seen in the series again. This sort of thing used to drive me mad as a kid watching Knight Rider.

It's great seeing proper Star Trek III-style Klingons on The Next Generation, and they're well-written and excellently performed. Rob Bowman, who will go on to direct much of The X Files' best episodes, gives the episode a strong visual aesthetic. The climactic action scene on the engineering deck is very well shot and timed.

It's probably worth noting the Star Trek debut of Vaughn Armstrong as Korris. He will return to Star Trek in eleven other roles, including more Klingons as well as Cardassians, a Borg and Enterprise's Admiral Forrest.

This is by no means a perfect episode, but it's entertaining and more importantly it helped the production team to realise the sorts of stories they could tell with Worf. It's also the template upon which the next decade or so of Klingon-centric episodes were based, so it's quite historically significant as well. Seven good episodes out of 19 gives Season 1 a score of 37%.
Posted by Grant at 9:26 AM