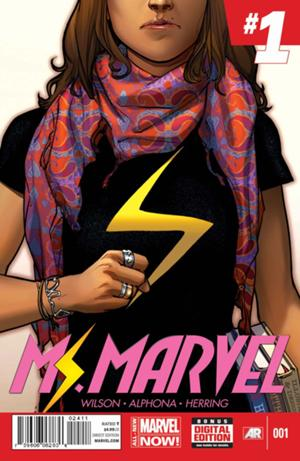 Credit where it's due: while Marvel may struggle with publishing successful comics with female protagonists, it's not through lack of trying. Not only are they shortly relaunching Captain Marvel to give it a publicity boost, they're also reviving former title Ms. Marvel with new character and a fresh angle. The last Ms. Marvel has graduated to becoming Captain Marvel, and the new Ms. Marvel is Turkish-American Kamala Khan.

This book received a lot of advance publicity on account of the fact that Kamala Khan is a Muslim. While it's refreshing to see religious diversity in American comics, I'm more interested in the fact that Kamala is a great, well-written character. She's immediately likeable, funny and rather sweet. She's also a fan of superheroes, and it's hilarious seeing that expressed (although I should point out that superhero slash in the Marvel Universe is a lot skeezier than Marvel slash fiction in the real world - for us they're fictional characters, whereas for Kamala they're actual people, and real person slash is something I find deeply inappropriate and sleazy).

Plotwise this is basically a nice introduction to the lead character, with a last page lead-in to the superheroic stuff next issue. It's rather by-the-numbers, albeit with some interesting stuff about how a Muslim teenager interacts with her non-Muslim classmates.

Adrian Alphona has a nice cartoony style that suits the teenage characters. It reminded me quite a lot of Runaways, so it wasn't a surprise when I looked him up and discovered he was indeed the artist on that comic as well. There's a hallucinatory sequence at the book's climax that Alphona just knocks out of the park. I really hope he sticks on the title as regular artist, because it really works.

This is a very solid and enjoyable first issue, and is certainly good enough to warrant picking up the second when it comes out. Here's hoping that with Ms. Marvel we have a female superhero comic that sticks around for a while. (4/5)

Greg Pak has simply nailed Superman's personality. He makes it seem effortless, although I'm sure it wasn't: I still maintain that of all the household name superheroes, it's Superman who is the most difficult to write. Pak, however, knows exactly what makes Kal El tick: he may be the most powerful guy on Earth, but at his heart he's a nice guy from Kansas. This current arc teams him with Lana Lang, and Pak's done outstanding work with her as well. She's driven, likeable and most importantly she's capable. It's such a relief to see DC publishing a straightforward and enjoyable Superman comic book again. (4/5)

I've written extensively about how much I liked the original Africa-set Batwing, and how annoyed I was that DC's soft reboot relocated the book to Gotham City and turned it into a sort of weak Batman clone at the same time. While my dislike for the change remains, I have to admit this is a damn good comic book this month. The art is great (the opening two-page spread looks brilliant), the writing is solid, Luke Fox's Batwing is actually starting to distinguish himself from Bruce Wayne's Batman, and the new villains are intriguing. It's a shame that, with sales continuing to fall, Gray and Palmiotti have finally made this version of the book work - only it's almost certainly too late. (4/5)

Another neat little one-off mission, which continues to expand on Natasha's character while developing the background for an ongoing story as well. I think this is a clever strategy, pulling the reader in with simple, easy-to-read adventures while setting up the long-running repercussions of those adventures at the same time. I'm a bit annoyed Marvel felt the need to publish three issues in the space of a month, but as long as they settle back to a monthly schedule from here they've almost certainly got a regular customer. For one thing, that painterly artwork by Phil Noto is difficult to resist. (4/5)

As is regularly the case with Layman, this is a great little Batman story. Lopresti and Thibert have done beautiful artwork for it as well. I do suspect, however, that all of the tie-ins to this arc last month in Batgirl, Batwing and Birds of Prey existed purely to pad out the inevitable trade paperback collection. They really didn't add much to the story. Still, those aside, this issue is great. Good character work, great plot developments and a cavalcade of Batman villains throughout. (4/5)

We're getting to that time in a miniseries again, Geoff. You know the time: it's that stage in the story when the reader looks at the cover where it says "5 of 7" and thinks "wow, either they're really squeezing a lot of story into this thing in the next two issues or this is a total non-event". It's up to you which way this goes, Geoff. David Finch and Richard Friend are doing great artwork, and the premise has been good. It's just abnormally slow, as if you're biding your time each issue until you reach another cliffhanger. I was quite annoyed when "Trinity War" lacked a conclusion, and simply segued into this miniseries. If this book ends by segueing into a third series, you are losing a sale my friend. (3/5)

This has consistently been one of the best comic books of the past year, with unique artwork, clever flipped layouts and a science fiction story that's both intelligent and inventive. Two characters, one from our past and one from our far future, who have met and now inexplicably swapped lives. This is the sort of book that all science fiction fans should be reading, and quite frankly when the Hugo Awards swing around later this year it's the sort of book that should be on the ballot for Best Graphic Story. (5/5)